Just more than five years ago, South Africa’s ruling party, the African National Congress (ANC), released its 2014 election manifesto. We have followed up on the promises it made about jobs, electricity and house title deeds.

This report looks at the ruling party’s promise to install solar water heaters. Did they keep their word?

The ANC's 2014 election manifesto contained an impressive promise: "[In the next five years] a further 1.3 million homes will be installed with solar water heaters, bringing the total to 1.75 million homes, covering more than 7 million South Africans."

This promise suggested that the government had installed 450,000 solar water heaters when the ANC made the commitment in its 2014 election manifesto.

However, according to the department of energy’s annual report for 2014/15, only 400,046 solar water heaters had been installed by the start of the financial year in 2014.

To fulfil the promise, 1.3 million solar water heaters would have to be installed by the end of March this year.

'No progress' on installation 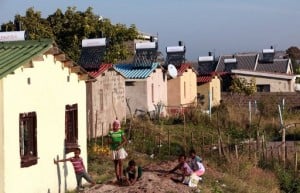 Solar-powered heaters installed by Eskom on the roofs of homes in the township of Demat, south of Durban, to help ease pressure on the grid. Photo AFP/Rajesh Jantilal

The department of energy took over the implementation of the solar water heater programme from Eskom in 2014/2015.

The programme’s aims include “reducing electricity demand, and improving job creation and skills development opportunities for the youth and women”.

According to the department’s annual performance plan for 2018/19, “since the programme was moved back from Eskom, more than 80,000 units have been manufactured. However, we need to concede that no progress has been registered in respect of the last and important phase, i.e. installation. We have thus taken a conscious decision to move this phase to the Central Energy Fund (CEF), for it to commence with installation in collaboration with the Independent Power Producer Office (IPP).”

Based on information in the department of energy’s annual reports, 36,190 solar water heaters were installed in the first two years of the five-year period in which the promise was supposed to be fulfilled.

In the place of a target for the installation of units, the 2016/17 annual report mentions a solar water heater programme implementation plan. The latest annual report says units could not be installed because of “delays in confirmation of installation areas by municipalities”.

Despite repeated requests, the department did not confirm these figures by the time of publication.

According to National Treasury, there was no budget for the manufacturing of solar water heaters for the years 2018/19 to 2020/21 but there was money to install already manufactured units.

“There are thousands of units that have already been manufactured but are currently being stored in warehouses. The department is best placed to provide reasons for the delays. It is envisaged that these units will be installed in households over the medium term.”

The department did not respond to a request to explain the delay.

According to the latest survey, 510,351 households indicated that they owned a solar hot water geyser.

Asked why the number declined between 2016 and 2017, Roux said: “It is very difficult to attribute the year-on-year decline to a single issue. The sample might very well play a role. Generally we consider a change of 9,000 units as relatively small.”

If the latest available Stats SA figure is multiplied by the average household size (3.3), it comes to 1.7 million people. This is not close to the more than 7 million South Africans envisioned in the ANC promise.

The ANC did not respond to a request for comment.

Based on the available data, fulfilling this promise is not within reach. - Liesl Pretorius (5/03/2019)