Is Botswana ‘one of the world’s 6 best countries to live in’?


According to “a BBC study”, Botswana is “one of the world’s six best countries to live in”, a recent Business Day article claimed.

Freelance journalist Tom Nevin listed Botswana alongside Canada, Chile, Denmark, Japan and New Zealand as the best-governed countries in the world, based on the criteria of “security, low corruption and good governance”.

Nevin further stated: “The BBC drew on data from three international surveys - the World Justice Project’s Rule of Law index, the World Bank’s Government index and the Social Progress index - to rank countries based on their performance across different categories.” 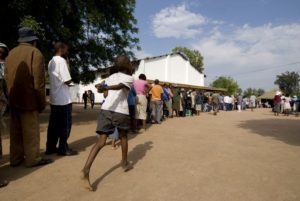 Botswanan voters line up to cast their ballots at a polling station in Gaborone in October 2009. Photo: AFP/Monirul Bhuiyan

Nevin didn’t link to the study he referred to. But Google turned up a BBC Travel piece from earlier in January 2018, which seems to have been Nevin’s source.

Titled “What it’s like to live in a well governed country”, it too refers to the same countries and lists the same data sources (Rule of Law Index, Worldwide Governance Indicators and Social Progress Index). Based on this data, author Lindsey Galloway suggested the six countries “consistently rank highest for their progressive social policies, trust in government and effective justice systems.”

Asked by Africa Check whether the article was his source, Nevin said: "I guess so. It’s the only BBC piece I can find on the subject. I was more interested in the notion of Botswana being so high on the list than in the detail of the story."

Africa Check’s attempts to reach Galloway were fruitless. (Note: We’ll update this report should she respond.)

To meaningfully measure the quality of governance, you first have to define what it encompasses. Theories about this are not well developed and highly politicised, however.

Indices such as the ones referred to are an attempt to quantify this complex concept so as to make comparisons between countries and over time possible, among other things.

However, Dr Karen Smith, an international relations specialist at Leiden University, told Africa Check: “It is good academic practice not to take rankings or measurements of any kind at face value.” In addition, she suggests that the sources used in compiling rankings should be scrutinised.

Here are brief summaries of what the indices concerned base their scoring on:

Worldwide Governance Indicators (compiled by the World Bank): “Governance consists of the traditions and institutions by which authority in a country is exercised. [...] The WGI are composite governance indicators based on over 30 underlying data sources.”

Rule of Law Index (compiled by US non-profit the World Justice Project): “Measures how the rule of law is experienced and perceived by the general public across the globe.”

Social Progress Index (compiled by another US-based non-profit, the Social Progress Imperative): “We measure 50 indicators of social and environmental outcomes to create a clearer picture of what life is really like for everyday people.”

How did the countries identified in the articles stack up in the latest iteration of these indices?

The Worldwide Governance Indicators does not provide an overall score based on the six individual indicators it measures. Botswana’s best score was for “Political Stability and Absence of Violence/Terrorism” (percentile rank 90) and worst for “Voice and Accountability” (percentile rank 59).

In the Rule of Law Index, only Denmark made the top six, while both Denmark and Canada featured in the top six of the Social Progress Index.


Botswana, interestingly, was not the best performing African country in either of them. Both Ghana (43) and South Africa (44) were ranked higher in the Rule of Law Index. Tunisia (51), South Africa (66), Algeria (75) and Morocco (78) all fared better in the Social Progress Index.

On this evidence, both Business Day and BBC Travel have misrepresented the rankings as provided by the governance indicators they referred to. - Markus Korhonen (08/02/2018)