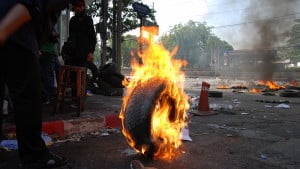 This picture was taken in Bangkok, Thailand, in 2010. Photo: Takeaway/Wikimedia Commons

Meet the most versatile burning tyre in South African news. It has been used to illustrate reports on violence and protests all around the country.

Police homes torched in the Bloemhof area in the Northwest province. Protest over the Mohlakeng municipality in Randfontein, Gauteng. Pre-election violence in Sterkspruit in the Eastern Cape. Post-election violence in Gauteng's Alexandra township. Protesters blockading roads in Durban North, KwaZulu-Natal.

In its latest incarnation, the rubber wheel poses as a Mamelodi tyre on the SA Breaking News website. The story relates to minibus taxi-owners protesting a new bus service.

But a Google Images search shows that the tyre actually caught alight in 2010 in Bangkok, Thailand during anti-government protests. The photographer, going by the username Takeaway, posted it to an online repository of free-use images called Wikimedia Commons.

Its caption reads: "A tyre, with its interior filled with petrol and set on fire, is ready to be kicked out on to Rama 4 road in Bangkok. The resulting smoke creates a smoke screen between the army and a large 'red shirt' barricade further down Rama 4 preventing the army of getting a clear view of the protesters there."

Africa Check has previously run a blog piece on the use of news photographs as catch-all illustrations, saying that websites that do so without informing their readers of where the photo originated, for example, “lie to their readers and show contempt for news photographers”. - 3/7/2015

Guide: How to spot fakes and hoaxes online