Africa Check has previously investigated many Facebook pages advertising nonexistent job opportunities. We’ve even published a guide to spotting job scams on Facebook, and an analysis of how these scams prey on job seekers.

These dodgy deals include a job scam which offered jobs at South African bank Capitec.

A new Facebook page named "Capitec Careers Available Now" appears to be part of a similar scam. It involves multiple pages posting misleading job adverts, of which the Capitec page is just one.

Here are some of the warning signs of a job scam and the techniques being used by pages to avoid being caught out.

The supposed Capitec job advert has a number of hallmarks of a scam. To begin with, the ad doesn’t link to Capitec’s website but to a broken page on a site with no connection to Capitec.

Even if a job offer you see on social media looks real, don’t follow the links in the ad. Instead, try to find the job listing on the company’s official website.

Capitec, for example, has a careers page on its website. Here anyone can search for available jobs.

Since this Facebook page doesn’t give details of the position it claims to be advertising, we can’t confirm whether this scam has copied the details of a real Capitec job listing or made one up.

Capitec only lists career opportunities on its website, and not on its official Facebook page. Don’t trust any job listing that only appears on social media.

The suspicious job ad also gives obviously incorrect details, like claiming the deadline for applications is 22 January 2020, a year before the page itself was created.

Mistakes like these are possible in real job ads, but are more likely to come from scammers who tend to create many different fake listings.

The page itself is also plastered with warning signs. It’s only published one post, uploaded a single image – its profile picture – and provided no information except for misclassifying the pages as a “Musician/Band”. These are all indicators of a suspicious page. 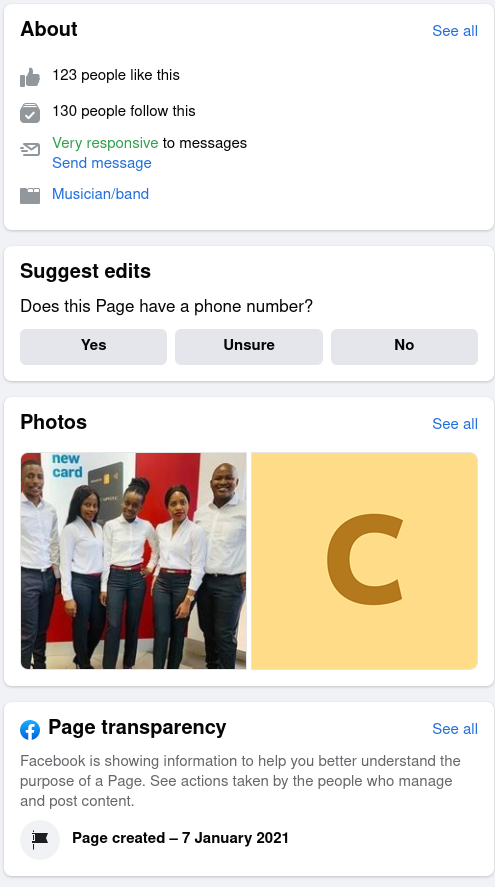 We compared it to the official Capitec Facebook page. This page is verified by Facebook, includes a phone number, official website address, details about the company, and makes regular posts, many of which include images and other media.

This is what you would expect from the social media account of a major bank like Capitec.

So it looks like the scammers haven’t put much time or effort into creating this fake Capitec jobs page. But this may make running job scams easier.

Africa Check has debunked a nearly identical page in the past. This page, still visible on Facebook, advertised jobs in South African correctional services.

While some of the details have been changed, the posts published by the two pages share similar formats, and ask people to apply for different jobs by sending a WhatsApp message to the same phone number.

This number has also appeared in other fake job listings, including on a page called “Government Jobs Application Page”.

The correctional services post was shared to a page that advertised a number of different suspicious jobs. While Africa Check was able to easily rate the entire page as linked to a scam, it was impossible to track down every page that had shared the suspicious post.

In the same way, a network of other pages have shared the page advertising fake Capitec jobs. These include pages named “More jobs”, “Learnerships ,Job And Bursaries+” and “Learnerships internships &bursaries”. All of these pages post or share suspicious job adverts.

By using a network of pages to spread misinformation, rather than just one, there are less consequences for scammers if a page is taken down for sharing misinformation.

If one of the pages that shared the fake Capitec job ad were taken down, the Capitec page would still exist, leaving the others unaffected.

If the Capitec page were taken down, then pages which had shared the false ad would be mostly unaffected, and able to continue promoting other scams.

The page that shared the correctional services post has not been taken down, while the original page it was posted on has now been flagged by Facebook as sharing misleading information.

It is unclear whether all of these pages are operated by the same scammers, but all of the pages regularly share misleading or obviously fake job listings.

Read our guide to Facebook scams, and look for work on official job listings sites and company websites.