Speaking in New York, South Africa’s president claimed that farmers are not being killed in his country.

Cyril Ramaphosa was commenting on a tweet by United States President Donald Trump in an interview. Trump had tweeted in August 2018 that he had asked his secretary of state to “closely study the South Africa land and farm seizures and expropriations and the large scale killing of farmers”.

“On the tweet itself... it was clearly misinformed,” Ramaphosa told media company Bloomberg on 26 September 2018. “And whoever gave him that information was completely wrong. There are no killings of farmers or white farmers in South Africa.”

But official crime statistics released this month by South Africa’s police service show this is wrong.

South Africa’s police released official crime statistics on 11 September 2018. These included statistics on the number of people murdered on farms and agricultural smallholdings, which met the definition contained in the 2011 Rural Safety Strategy. (Note: Read our factsheet for a full explanation.)

Between 1 April 2017 and 31 March 2018, a total of 62 murders were recorded on farms and agricultural smallholdings. Of those people, 52 were identified by the police as owners or occupiers of the property. 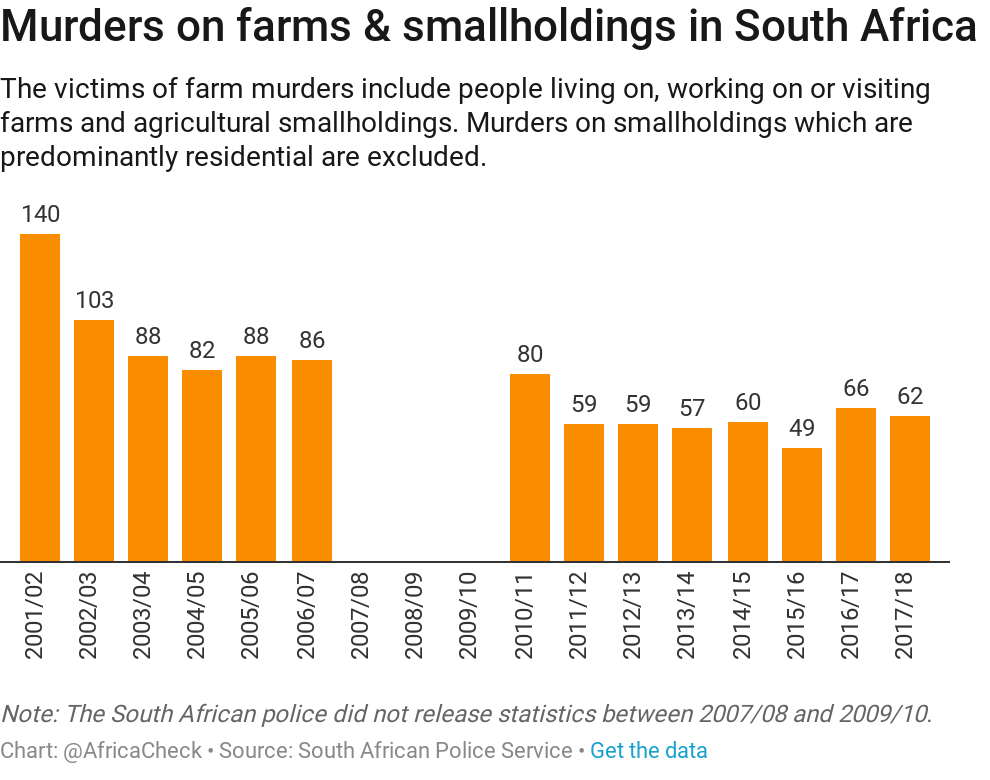 The police didn’t list which share of the owners or occupiers were white, but provided a racial breakdown for the overall murders. The majority of the victims (46) were white.

The fact that people on farms and smallholdings in South Africa are victims of murder is not debatable. What is unclear is whether these people are murdered at a higher rate than other South Africans. - Kate Wilkinson (27/09/2018)