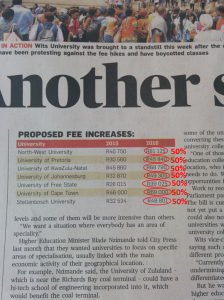 Amidst student protests across South Africa this week, a study fees table showed just how far wrong information can travel while the truth is still putting its shoes on.

City Press published a table on 18 October in which the newspaper mistakenly showed that in 2016, there will be a 50% increase in student fees across the board at seven South African universities. It went out in the paper's first edition, but after a tweet from University of Cape Town professor Tom Moultrie, editor Ferial Haffajee pulled the table from their second edition.

Haffajee explained to Africa Check that the story got reassigned to a junior reporter on Saturday after a senior reporter fell ill. "The day got pretty hectic, because there was a lot of breaking hard news. Figures are usually thoroughly checked, but it did not happen in this case," Haffajee said.

After an ethics session on Tuesday and "a lot of thinking of where it went wrong", City Press decided to have their systems reviewed by journalism ethicist Franz Krüger and to have calculations in future checked by four people. preferably experts in the field.

"The error is something we're mortified about, especially during the fees crisis," Haffajee said.

City Press has officially corrected and retracted the table, but tweets citing it continued throughout the week, with writer Tom Eaton tweeting "[f]ees must fall but please don't use these". - 22/10/2015

Africa Check will publish comprehensive graphics on Monday, allowing for fee comparisons between universities and degrees at first-year level for 2014, 2015 and where available, 2016.