Claim that Zim has 'highest literacy rate' in Africa unsubstantiated 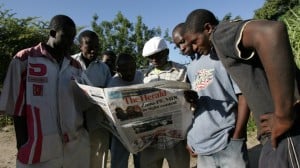 Zimbabwe has “the highest literacy rate on the African continent at 92%”, the minister of higher and tertiary education, science and technology development, Jonathan Moyo, claimed recently.

UNESCO’s Institute for Statistics estimated that 83.6% of Zimbabweans aged 15 and older were literate in 2011, using data from Zimbabwe’s 2011 Demographic and Health Survey. A person was considered literate if they had attended secondary school (generally aged 15 and older) or could read a whole sentence.

However, experts caution against ranking countries according to their literacy rates. This is due to the different ways literacy is defined, varying survey methods and differences in the period covered by the data. Because of these limitations, Moyo’s claim that Zimbabwe has “the highest literacy rate on the African continent” cannot be substantiated. - Kate Wilkinson (24/08/2015)