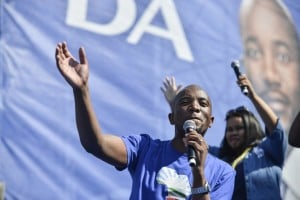 South Africa “is officially the worst country in the world for a child to learn maths and science”, the Democratic Alliance’s parliamentary leader, Mmusi Maimane, said in a Youth Day speech on 16 June.

This week, during a debate on President Jacob Zuma’s State of the Nation address, Maimane repeated the claim: “How does the department with the biggest budget from our national fiscus, and the biggest budget in Africa, deliver the worst maths and science education on the entire planet?"

Stevens Mokgalapa, the DA’s Shadow Deputy Minister of International Relations and Cooperation picked up the refrain in his State of the Nation debate speech: “Just under three weeks ago the World Economic Forum released a study that placed our maths and science results at last in the world.”

Is there any truth to the claims?

Well, the World Economic Forum (WEF) report was not exactly a “study”. As Africa Check pointed out in a recent report, the rankings – which placed South Africa last out of 148 countries for the quality of maths and science education - were derived from an annual “Executive Opinion Survey” carried out by the WEF.

The opinion survey drew on interviews with various unidentified “business leaders” who were asked to score the quality of education in their various countries from “poor” to “excellent”. No standardised tests were conducted to assess the quality of maths and science education in schools. 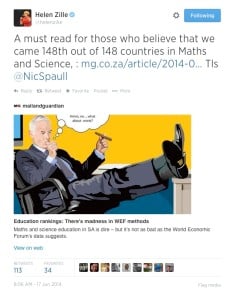 Nic Spaull, a prominent education researcher, put it bluntly when he described the rankings as “subjective, unscientific, unreliable and lack[ing] any form of technical credibility or cross-national comparability”. (DA leader Helen Zille later tweeted Spaull’s article approvingly, stating: “A must read for those who believe that we came 148th out of 148 countries in Maths and Science.”)

There is sufficient evidence to make the case that South Africa’s education system facing a crisis. So why do senior DA politicians persist in using a discredited maths and science ranking – one that even party leader Helen Zille doesn’t believe – to support their argument?

The DA’s former director of communications, Gavin Davis, previously told Africa Check that the party “takes accuracy very seriously and we will gladly rectify any mistakes pointed out to us”. Will they do so in this instance? - Africa Check 20/06/14