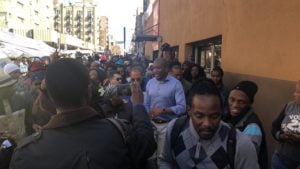 The leader of South Africa’s main opposition party, the Democratic Alliance (DA), made a startling claim in downtown Johannesburg earlier this month.

News website Independent Online reported that Mmusi Maimane told commuters and taxi drivers that “one in four children are dying mainly because of malnutrition.”

In November last year, Africa Check fact-checked a billboard erected by the DA which claimed that “four children die of hunger every day in SA”. We found that the claim was mostly correct for 2015/16.

Maimane’s recent statement, however, suggests that 25% of South African children die from malnutrition.

Africa Check contacted the DA about Maimane’s statement. Graham Charters, the party’s deputy chief of staff, first said that Maimane had been misquoted.

“Mr Maimane said that four children per day in South Africa die of starvation or malnutrition,” Charters told Africa Check. But audio from the event disproves this.

Maimane can be heard telling the crowd that “one in four children are dying every single day in this country, mainly because of malnutrition”.

Charters has since conceded that Maimane’s statement was “clearly an error”.

“He clearly meant to say that which he’s said before - that four children die every day in South Africa due to acute malnutrition,” said Charters.

Child deaths from malnutrition in South Africa are a serious concern. South Africa’s District Health Barometer, an annual report that provides statistics and analysis of important health indicators, has described them as “unacceptably high for a middle-income country such as South Africa”.

The most recent data shows that 1,188 children under the age of five died from malnutrition in 2016/2017. This equal to just over three children every day.

Worryingly, these numbers are likely an underestimate. Government only records deaths in health facilities and some causes of death are misclassified. - Ina Skosana (20/06/2018)