Did Nigeria’s education minister announce schools will open on 7 September 2020? No, video old and doctored

This article is more than 2 years old 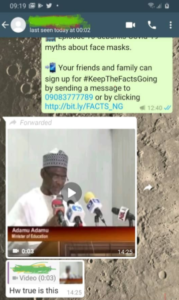 A subscriber to Africa Check’s WhatsApp line asked us to verify the video.

A three-second video that has been heavily shared on social media appears to show Nigeria’s minister of education, Adamu Adamu, saying all schools in the country will reopen on 7 September 2020.

The hashtag #schoolreopening, accompanied by the video, was among the top trends on Twitter on Tuesday, 18 August 2020. It was also widely circulated on WhatsApp.

A similar post containing the claim on Facebook attracted hundreds of comments. “Alhamdulillah. BREAKING News: All Schools in Nigeria are Resuming on 7th September (University, Poly, Secondary School and Others,” the Facebook post reads. It did not include the video or quote the minister of education.

It goes on to say that “the Joint Admission and Matriculation (JAMB) and all tertiary institutions have agreed to commence the 2020/2021 post- Unified Tertiary Matriculation Examination (UTME) screening on September 7.”

It is true that university screening examinations have been scheduled for 7 September 2020. But has the government announced the same day for schools in the country to reopen following a prolonged break due to the Covid-19 pandemic?


There are a few red flags about the video’s legitimacy. First, the minister did not wear a face mask, as he has done in public in recent months following the issuance of Covid-19 guidelines.

Second, while requiring a closer look, the movement of his lips in the clip does not match the speech, suggesting the voice was dubbed over the video.

A further search showed the original clip came from a news broadcast by the National Television Authority news on 12 January 2016. Here, Adamu was speaking at the start of a workshop on the Africa Centres of Excellence, a universities research project supported by the World Bank.

The event in Nigeria’s capital, Abuja, was not related to the reopening of schools.

In July 2020, Adamu said all schools supervised by the federal ministry of education “will only open when we believe it is safe for our children and that is when the situation is right, not when the incidents of the infection are going up.”

Since then, the education ministry has not announced any reopening date.

The last announcement of the ministry’s official Twitter timeline was for the reopening of secondary schools so that students in exit classes can take their school certificate examinations.