Several Facebook posts have shared the claim that a South African company, only registered on 29 January 2021, has been given a R200 million tender to distribute Covid-19 vaccines.

The first vaccine doses arrived in the country on 1 February.

The posts also claim that the company, Jova Vaccines Supply, is owned by the daughter of Refilwe Mtsweni-Tsipane, the premier of Mpumalanga province.

The claim has been dismissed by the premier, but that has not stopped it from being shared on Facebook, WhatsApp, and Twitter.

And it has led South Africa’s official opposition party, the Democratic Alliance, to release a statement demanding that “the premier must provide the DA and the South African public with proof of her innocence”.

So how much of this claim is true? Did Jova Vaccines Supply receive a R200 million tender, and who owns the company? 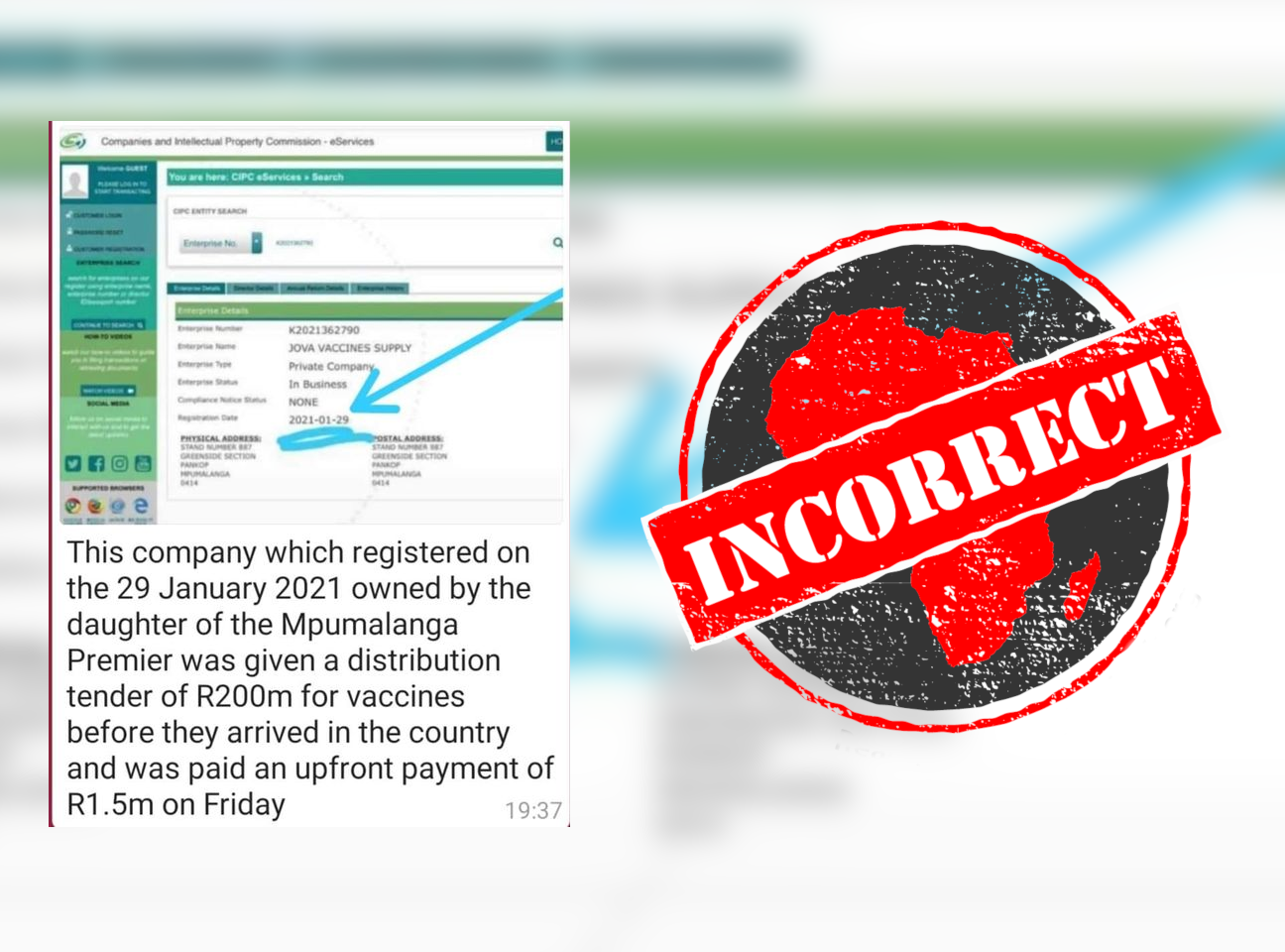 Jova Vaccines Supply is registered with South Africa’s Companies and Intellectual Property Commission (CIPC), and social media posts about the claim include a screenshot of the company’s CIPC registration details. Here it’s clear the company was registered in Mpumalanga on 29 January.

But the company’s registration date seems to be the only correct detail circulating on social media.

The company is registered to a “Serati Simon Mashilo”, who does not share a surname or any other apparent connection with the Mpumalanga premier, Refilwe Mtsweni-Tsipane. And according to Mashilo’s identity number, listed with the CIPC, the company director is seven years older than Mtsweni-Tsipane.

Africa Check contacted the CIPC, who confirmed that they verify the identity and personal details of company directors when registering a company. So Mashilo is a real person, and is seven years older than the premier.

News organisation News24 spoke to Mashilo, who the organisation says “is emphatically not the daughter of the Mpumalanga premier”. Mashilo told News24 that he registered the company in order to get involved in the distribution of vaccines, but had not been awarded a tender to do so.

Mtsweni-Tsipane has also said that no members of her family were involved with Jova Vaccines Supply. She said the distribution of vaccines would be overseen by a recently established inter-ministerial committee, to be led by deputy president David Mabuza.

Africa Check could find no evidence that any of Mtsweni-Tsipane’s children were involved with Jova Vaccines Supply. We reached out to the premier to confirm the names of her children, but she had not responded at the time of publication.

But even if the premier or her family have no connection to Jova Vaccines Supply, has it been given a R200 million tender?

No tenders posted for vaccine distribution

There is no evidence that Jova Vaccines Supply has won a tender to distribute vaccines, which is in keeping with statements from both the company’s registered director, and the Mpumalanga premier.

In fact, there is no indication that any tenders have been awarded for vaccine distribution in Mpumalanga. No such tender has been advertised by the provincial government or the Mpumalanga health department.

Nor have any similar tenders been advertised or listed as awarded on the national treasury’s dedicated tender publication website. The treasury’s summary of government spending related to Covid-19 shows that while the Gauteng province’s health department has purchased fridges for vaccine storage, no other vaccine-related spending has been recorded.

Jova Vaccines Supplywas registered as a company on 29 January, but there is no evidence that it has been awarded a tender to distribute vaccines in Mpumalanga province. Nor is there evidence that the company is owned by the premier’s daughter.