Does Swaziland have the world’s 4th highest rape rate? 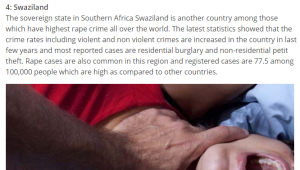 Swaziland is the country with the fourth highest rape rate globally, The Times of Swaziland reported yesterday.

The newspaper was referring to a list of the “Top 10 Countries With Highest Rape Crime 2015” (sic) compiled by Abcnewspoint, an online news forum, in July 2015. South Africa was ranked first, Botswana second and Lesotho third.

Swaziland came in fourth because “registered cases are 77.5 among 100,000 people which are high as compared to other countries”.

Africa Check was unable to find out where Abcnewspoint got the statistic from. The United Nation’s latest statistics for Swaziland are from 2004, when 849 rapes were reported. This equates to a rate of 77.6 rapes per 100,000 people in the country.

However, the United Nations and experts caution against ranking countries based on their rape rates. Different countries have different definitions of rape, which may include or exclude the rape of men or marital rape. Rape offences are also counted and recorded in different ways and under-reporting rates around the world are unknown.

For these reasons, it’s impossible to say exactly where Swaziland, or any country, ranks for its rape rate. “Listicles” of this sort, which play fast and loose with statistical comparisons, provide little insight into this serious social concern. - 21/08/2015