Kenya’s parliament is set to debate whether cancer should be declared a national disaster.

The motion, listed in the house on 18 April 2018, claims that “cancer causes more deaths than HIV, TB and malaria combined”.

When Africa Check fact-checked a similar claim in 2016, we found it difficult to judge as the numbers were highly unreliable. Have things changed in the meantime? 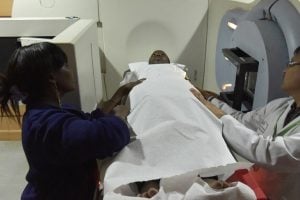 Radiation therapists prepare a patient for a radiation session at the Cancer Care Kenya centre in Nairobi on in December 2016. Photo: AFP/SIMON MAINA

Let’s start with the number of cancer deaths. Kenya doesn’t have a national cancer registry yet, so the exact number of deaths each year is unsure.

For example, civil registration data gave a provisional figure of 15,762 deaths from cancer registered in 2016. However, the Kenya National Bureau of Statistics estimates that only 41.9% of deaths in the country were registered that year.

To get a better sense of the toll of non-communicable diseases in Kenya, a group of organisations coordinated by the health ministry carried out a nationally representative study in 2015.

This put cancer deaths in the region of 28,000 in that year. But the authors of the study said even this estimate is “conservative and could be higher given that many cases go unreported and unaccounted for”.

(Note: The World Health Organisation has a similar estimate - 28,453 deaths - for 2012, but notes that this estimate has a high degree of uncertainty as it is not based on any national data, but modelled instead.)

The claim in the motion comes into doubt when we consider AIDS-related deaths, which UNAIDS put at 36,000 in 2016. According to the agency’s models, the count could be as high as 47,000.

UNAIDS says that it uses models because “it is impossible to count the exact number of people living with HIV, people who are newly infected with HIV or people who have died from AIDS-related causes in any country”.

“Doing so would require regularly testing every person for HIV and investigating all deaths, which is logistically impossible and ethically problematic.”

The next country estimates will be released in July 2018, Mary Mahy, who heads the epidemiology team at UNAIDS, told Africa Check.

As for TB deaths, the World Health Organisation (WHO) says in its Global Tuberculosis Report it used country data to estimate that there were 29,000 deaths from tuberculosis in Kenya in 2016. However, there was significant uncertainty in the numbers due to the lack of quality cause of death data, senior WHO epidemiologist Philippe Glaziou told Africa Check.

The WHO used Kenya’s first post-independence national survey on the prevalence of TB - released in March 2017 - to estimate how many people would eventually die from TB, Glaziou said.

When it comes to malaria, mortality data in Kenya fluctuates wildly. Civil registration data provisionally put it at 16,000 in 2016.

The WHO estimates of malaria mortality in Kenya are based on models, the organisation’s malaria unit told Africa Check. This is because the country has historically had weak malaria surveillance systems.

As national systems improve, "the need to use models will become less frequent, but there is still much improvement required before we can rely only on the reported data", the unit added.

Taken together, the most recent mortality estimates show that it is highly unlikely that cancer kills more Kenyans than HIV, tuberculosis and malaria combined. - Lee Mwiti & Vincent Ng’ethe (19/04/2018)

Note: This report was updated on 19 April 2018 to include the comments of WHO's malaria and TB experts.