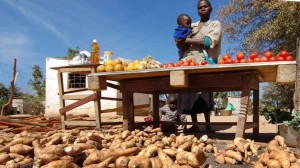 The International Labour Organisation (ILO) has claimed that the unemployment rate in Zimbabwe currently stands at just 5.42%. By comparison, according to a chart published on the organisation’s website this week, South Africa has a significantly higher unemployment rate of 25.01%.

But, as we have previously reported, finding accurate unemployment figures for Zimbabwe is a problematic exercise with estimated rates ranging wildly, from as low as 4% to as high as 95%.

The ILO estimate appears to be based on official data released by Zimbabwe’s agency for national statistics, Zimstat. The most recent available figures, published in a Zimstat labour survey in June 2011, put unemployment at 5.4%.

Analysts describe the Zimstat figures as “unrealistic”. The reason for this is that Zimbabwe – unlike South Africa  – classifies subsistence farming as “employment”.

The inclusion of subsistence farmers was an internationally accepted survey practice at the time of the Zimstat survey in 2011. This changed after the 2013 Conference of Labour Statisticians in Geneva made recommendations to the ILO that work “for own final use” should not be counted as employment.

“If all countries implement this, these unrealistically low unemployment rate figures in African countries [like Zimbabwe] will stop,” Peter Buwembo, the manager for labour statistics at Statistics South Africa, told Africa Check.

New figures are expected in March this year when Zimstat publish their first labour survey since 2011.

The ILO’s unemployment rate estimates for Zimbabwe are not supported by reliable, current data and cannot be regarded as an accurate reflection of unemployment in Zimbabwe. - 21/01/15