Plugging his upcoming book, Kenyan lawyer Miguna Miguna posted an image of its jacket on Twitter in November 2018.

The book tells the story of the controversial swearing-in of Raila Odinga as the unofficial “People’s President” after he refused to contest the repeat presidential election in 2017.

The book’s title is Treason: The Case Against Tyrants and Renegades. Its jacket says “about one million people” attended the “historic event” at Nairobi’s Uhuru Park on 30 January 2018.

Miguna administered the oath to Odinga, a role for which the lawyer was dramatically deported to Canada. The Kenyan government says he is a Canadian citizen.

Impossible for park to hold a million people 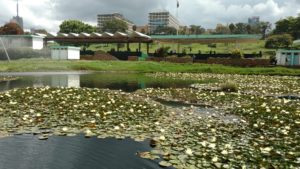 Recreationers are seen in the dais area of Kenya's Uhuru Park - where rallies are mainly held - in April 2018. Photo: AFRICA CHECK/LEE MWITI

Can the iconic park pack in that many people? When Miguna said in March 2018 that “more than a million” people showed up, Africa Check examined this often-repeated figure and found it to be physically impossible.

Using the Mapchecking tool, Africa Check plotted the area of the park where rallies are held. (Note: It’s in French, so right-click on the page and select “Translate to English”.)

At 2.5 people per square metre - the realistic density at political rallies, according to a UK academic who teaches crowd safety and risk analysis - the space can only hold 113,761 people at most. - Vincent Ng’ethe (21/11/2018)