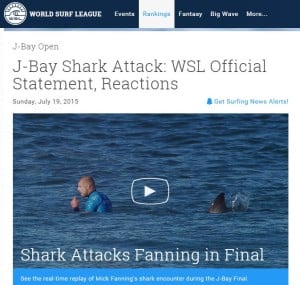 To fight off one shark is pretty awesome. To fight off two is incredible. But that is what some of media reports say happened in Sunday's incident at the surf championships at Jeffreys Bay in South Africa.

This was the version that went out initially - certainly unnerving.

The frightening encounter, in full view of television cameras, saw a shark fin breach right next to Australian surfer Mick Fanning in the waters at Jeffreys Bay.

US Magazine posted a link to the video under the headline "Surfer Mick Fanning Attacked by Sharks During Live Broadcast: Watch the Scary Moment!" Quoting the magazine, the Latino Post in California reported that "Fanning was reportedly in the water when two large sharks came toward him and grabbed his board as he attempted to get away".

On the World Surf League's website, a user called João Diniz said in the late afternoon it "looks like two sharks attacked Mick".

So did two sharks attack the man in the water? Not really.

Sarah Waries, project manager of Cape Town shark safety programme Shark Spotters, explained: "Many people believe that because they saw two fins there must have been two sharks, when it actual fact what they saw was the dorsal fin and the top of the caudal (tail) fin of the shark. Based on the colouration, shape and size of the fins we can deduce that it was a juvenile white shark of approximately two to 2.5 metres."

She added that sharks, being apex predators, are inquisitive and that the attack was likely just the shark investigating what the funnily shaped creature was. Frightening certainly. But not quite the same as two sharks attacking a swimmer as some reports now have it.