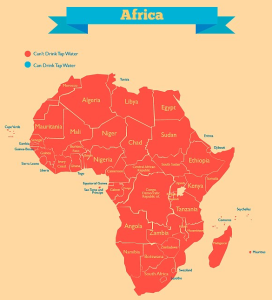 A screenshot of the infographic published on the MailOnline. Click to enlarge.

Is drinking tap water in South Africa “risky business”? The United Kingdom’s MailOnline claimed so this week in an article on where it was safe to drink tap water around the world.

According to an infographic, originally published by travel website Just The Flight, you can’t drink tap water in South Africa....or anywhere in Africa, actually. The MailOnline advised that “if you are holidaying in Africa or South America, bottled water will be the order of the day as tap water is unsafe for human consumption.”

The data for the infographic was supposedly sourced from the United States of America’s Centers for Disease Control and Prevention.

South African politicians have previously made the opposite claim about the quality of the country’s drinking water.

Dr Anthony Turton, a prominent water resource management specialist and professor at the University of the Free State’s Centre for Environmental Management, previously told Africa Check that he was not aware of “any objective [water] ranking system operating at global level”.

What do we know about the quality of South Africa’s drinking water? Statistics South Africa’s 2014 General Household Survey reported that 90% of households had access to water.

And the rest of Africa? We’ll be looking into that claim next week.