This claim appeared in an article published by the UK edition of the International Business Times. It recounted a fatal New Year’s Day accident on Table Mountain which claimed the lives of a tourist and her local guide.

The Cape Town attraction is “deadlier than the world’s highest peak”, the article stated, having claimed 218 lives in the past 100 years.

We asked SANParks’ regional communications manager for the Cape Region, Merle Collins, for the data on which this claim was based. She responded following publication.

"After extensive consultation with park management please be advised that Table Mountain is an open access area with hundreds of access points and routes and that we are unable to assist with your request. Furthermore, the two mountains are completely different (height, numbers of visitors, topography, temperature, snow, accessibility, weather, oxygen etc.) and comparisons/claims of this nature are not necessary."

(Note: The claim has not been taken down from the Table Mountain National Park website yet.) 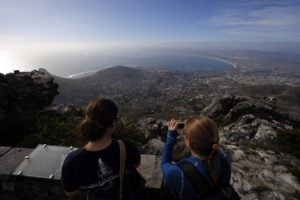 Tourists take pictures of the city of Cape Town as seen from the top of Table Mountain in May 2010. Photo: AFP/GIANLUIGI GUERCIA

The South African Mountain Accident Database is described as “one of the few sources which consistently kept records of mountaineering incidents, accidents and deaths across the Cape Peninsula and Table Mountain”.

Lewis is the database’s current curator and a member of the University of Cape Town’s Information and Communication Technology staff. It “is in no ways complete”, its developers caution, though they do put in every effort to keep the database’s records as comprehensive as possible.

“Deaths from crime and exposure [in the case of homeless people] occur that we are not aware of,” Lewis said, as these mostly occur between the suburbs and lower slopes.

The database is primarily populated with data from the Mountain Club of South Africa’s 13 nationwide search and rescue teams. Historical data is supplemented from archives, Lewis noted. 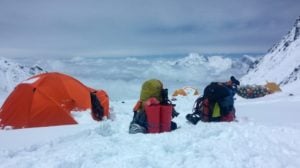 A view of mountaineering equipment at Camp 4 near the summit of Mount Everest in May 2016. Photo: AFP/NIMA GYALZEN SHERPA

The figure for Table Mountain is lower than the 288 deaths recorded for Mount Everest above 5,000 m, Richard Salisbury told Africa Check.

Salisbury is one of the creators and developers of the Himalayan Database, a compilation of expeditions which have climbed the Himalayas.

The database’s primary sources are expedition interviews conducted by Elizabeth Hawley, a former journalist and current director emeritus of the database. Data from these interviews is supplemented with “information gathered from books, alpine journals and correspondence with Himalayan climbers”.

All expeditions between 1905 and 2017 are recorded, the site states. Earlier data is recorded for select expeditions.

“[T]he comparison is as sensational as it is inconsequential,” Lewis told Africa Check.

“One needs to take into account the total number of people accessing Table Mountain and Mount Everest. This is not possible on Table Mountain as there is no controlled access, so a comparison of these two numbers is utterly meaningless.”

When absolute figures are considered, “it is very likely that the answer may be time-dependent, being true in some years and false in others,” Lewis added.

The total deaths on the mountains compared to the number of people accessing them gives us each mountain’s death rate. “Comparing death rates is more accurate than absolute values,” Salisbury told Africa Check.

As a rough indication of Table Mountain’s death rate, we'll use the number of people going up the Table Mountain Cableway as a proxy.

Since the cableway opened its doors in 1929, it has welcomed 26 million users up to January 2017. During this period, an estimated 228 deaths occurred. This gives a death rate of 0.01 deaths per 1,000 visitors.