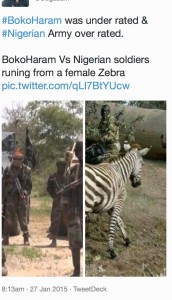 A photograph of two men in camouflage uniform being charged by a zebra is spreading online in social media posts mocking the Nigerian army’s ability to combat Boko Haram.

A recent tweet by a Ugandan journalist compared the photo to an image of heavily armed Boko Haram militants with the comment: "#BokoHaram was under rated & #Nigerian Army over rated. BokoHaram Vs Nigerian soldiers running from a female Zebra."

The image has been doing the rounds on Facebook, Twitter and various blogs for at least a year.

Trouble is, there are no zebras in the wild in Nigeria.

So where does the image come from?

Using Google’s reverse image search, we uploaded a screengrab of the photograph and trawled through the results.

It turns out that the photograph was actually taken by a Reuters photographer in Kenya on 30 July 2007. Two Kenya Wildlife Service rangers, working to help move 2,000 animals to the Meru National Park, had to make a run for it when a recalcitrant zebra charged them.

The moral of the story is that images can lie and, on social media, they often do. When in doubt, check before you tweet.

Recently we showed that numerous images circulating on Twitter purporting to show Boko Haram atrocities in the town of Baga did not come from there.

For help in identifying fakes and hoaxes online, consult our handy guide.