No, Chinese people aren’t opening their own police stations in South Africa


Photos of the Eastern Cape province’s police commissioner with Chinese embassy staff have been published on social media and a news website to claim that people from China have opened their own police stations in South Africa.

But a media statement and tweet from the South African police said the photos showed the opening of the new Chinese Community and Police Cooperation Centre in Newton Park, Port Elizabeth.

@SAPoliceService these pictures are circulating on different social media platforms, apparently the Chinese have opened a Police station in Port Elizabeth and have opened 13 others to date, please verify. pic.twitter.com/Cez8WobV3h

‘Platform for good relations with police’ 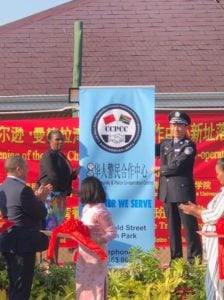 Police spokesperson Captain Khaya Tonjeni told Africa Check that the centre was “not a police station”. He said its purpose was to teach the basics of China’s Mandarin language to police officers who work at community service centres in Eastern Cape police stations.

Tonjeni said the Mandarin learning programme started in 2016, but the centre itself only opened on 28 October 2018, the day the photos of commissioner Liziwe Ntshinga and the Chinese Embassy staff were taken.

Jie Zhang, the head of the centre, said it was a nonprofit organisation working to improve relationships between the police, local communities and Chinese people living in the Nelson Mandela Bay municipality.

“In our centre, we have colleagues who work 24/7 who know English and Chinese. It’s also how we can fight against crime and contribute our part for a safer environment here.”

Dr Cobus van Staden, a senior researcher at the South African Institute of International Affairs, said a lack of information could make people worried about the presence of people from China in South Africa.

“The sort of large-scale engagement between the Chinese state and large Chinese companies with a large amount of migration to Africa is relatively new. But also, the policing forums themselves have not been as proactive as they could be in terms of communicating with the rest of the country exactly what their work is.” - Tshiamo Malatji (12/11/2018)