No, Daily Mail - Zimbabwe isn’t 'the second poorest country on the planet’ 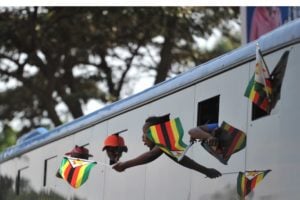 Supporters of Zimbabwe's incoming president Emmerson Mnangagwa, wave Zimbabwean flags from a bus as they arrive at the ruling Zanu-PF party headquarters in Harare on 22 November 2017. Photo: AFP/TONY KARUMBA

Showing what it said was the extravagant lifestyle of Zimbabwe’s wealthy and well-connected young elite, UK tabloid Daily Mail sought to contrast their living standards with those of poor Zimbabweans.

“Even though the country is ranked only second to Congo as the poorest on the planet, these politicians' off-springs and young entrepreneurs prove that there is still plenty of money floating around the country,” the tabloid’s online version reported on 21 November 2017.

It’s not the first time such a claim has popped up. In September 2015, Africa Check found that the widely circulated claim that Zimbabwe was the “world’s second poorest country” after the Democratic Republic of Congo was incorrect.

We had traced the claim to an article by New York-based magazine Global Finance. At the time, data from the International Monetary Fund placed the country 26th lowest of 187 countries when raw GDP per person was considered. (Note: The Business Insider report also cites Global Finance as the source of its story).

Has this changed in the intervening two years?

32nd lowest of the 194 countries with data

The IMF’s most recent comparative data on the world’s economies is contained in its October 2017 World Economic Outlook.

The gross domestic product (GDP) is a measure of the total value at current prices of final goods and services produced within a country in a specified period. It is the most commonly used measure of a country’s overall economic activity, the IMF notes.

Dividing the GDP by the population size provides a sense of how much every person’s income theoretically is. To aid comparison of GDP across economies, a common currency - the US dollar - is used.

But what about the cost of living?

The IMF’s figures are given at current prices (those displayed in banks and forex bureaus).

However, this does not reflect the cost of living or other factors, such as when goods and services consumed domestically and not traded on markets form a significant portion of the economy - as is the case in many developing economies.

To account for this, an indicator known as Purchasing Power Parity (PPP) is used to compare the local buying power of currencies. Essentially this is a measure of how many units of country A’s currency are needed in country A to buy the same amount of goods and services that country B’s currency would buy in country B.

Using data from the World Bank-coordinated International Comparison Programme, which has its current reference year at 2011, Zimbabwe’s GDP per capita was $2,006 in 2016. This is the 22nd lowest on the list. (Note: DRC and Congo Republic ranked 2nd and 52nd lowest respectively.)

Experts say that due to the structural weakness of economic data for many developing countries, any rankings should be treated cautiously. While Zimbabwe’s economic struggles in recent years are well documented, debate around the country’s new dispensation should be more nuanced. - Lee Mwiti (22/11/2017)