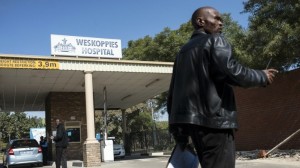 Do a fifth of South Africans suffer from a mental illness? Or a quarter?

These conflicting claims were contained in a Mail & Guardian report on the launch of a psychiatric response unit vehicle. The article's blurb stated that “[a]round a fifth of South Africans suffer from a mental disorder - but 75% don't receive the care they need”.

Further down the article read: “According to statistics from the health department and World Health Organisation, one in four South Africans will suffer from a mental health condition in their lifetime”.

The figures are not supported by the available data. As we reported earlier this year, only one nationally representative study on mental disorders has been conducted to date. It found that 16.5% - or one in six - of South Africa’s adult population suffered from some or other form of mental disorder in the 12 months it covered.

It also found that over the course of their lifetime around a third (30.3%) of the adult population would suffer from a mental disorder, with alcohol abuse the most common.

For more on the trouble with mental illness figures in South Africa, read our original report. – Africa Check 08/09/14