Only 3.5 mn NHIF members & their dependents can get instant hospital care in Kenya 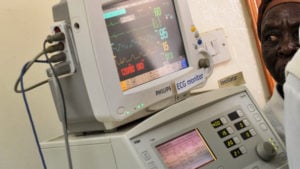 Jocelyn, 80, a member of a senior citizens support group looks at an electrocardiogram monitor at a Nairobi hospital on 30 September 2010. Photo: AFP /Robert Schmidt

Keen to leave his mark, President Uhuru Kenyatta wants every Kenyan covered by medical insurance by the end of his current and final term.

As an example of how this would improve the wellbeing of Kenyans, Kenyatta narrated the story of Jackson Wamai, a 28-year-old teacher who had struggled to pay for kidney dialysis, but was now being treated for free. The cost of this was borne entirely by Kenya’s public medical insurer the National Hospital Insurance Fund, Kenyatta said.

“But Jackson is only one of 6.8 million beneficiaries of NHIF medical cover. Within five years, my administration will ensure that 13 million Kenyans and their dependents are beneficiaries of this scheme,” Kenyatta said.

President ‘was referring to principal members’

Kenyatta had been referring to principal members when he talked of “beneficiaries”, the public insurer told Africa Check when contacted.


Information provided by the fund showed that it had 7,058,603 contributing members at the end of December 2017. Of these, 3,500,478 were active members, meaning they and their dependents could be treated at approved hospitals immediately. (Note: Members in arrears must first update their account if they are to be treated. If behind for more than a year there is a waiting period of at least 30 days before they can access healthcare.)

The irregular nature of contributions by informal workers was contributing to the significant portion of inactive members, Dr Vincent Okungu, a health economist based at Strathmore University told Africa Check.

Saying it was “politics as usual” Okungu, who has studied contributory financing extensively, queried how the inactive members could be enrolled if they were not contributing.

“[If] only 50% are active members, [the majority] of these are likely from the formal sector, which means the NHIF is facing massive challenges in extending coverage to the informal sector because of its contributory design,” he said. -Vincent Ng’ethe (22/01/2018)