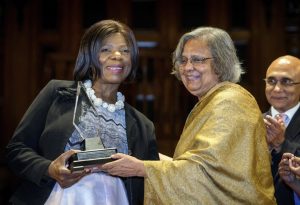 “When you check even the previous Public Protector [she] has been targeting black people. [She] has never targeted white people,” Hlaudi Motsoeneng told crowds outside the Cape Town High Court last week.

His claim, however, is incorrect.

Africa Check couldn’t comb through every investigation Madonsela conducted during her time as public protector from October 2009 to October 2016 but two investigations stood out.

In 2012, she investigated a complaint against the Western Cape premier, Helen Zille, regarding the awarding of a communications tender. Madonsela’s report found evidence of maladministration on the part of the premier’s department. However, Zille was not implicated.

Earlier this year, Madonsela investigated whether minister of trade and industry, Rob Davies, violated the Executive Ethics Code by failing to prevent a state event from turning into a political party rally. The complaint was lodged by the Democratic Alliance. The public protector did not find any evidence to substantiate the allegations.

(Note: Africa Check requested comment on Motsoeneng’s claims from both the public protector’s office and advocate Thuli Madonsela. At the time of publishing, we had not received a response. We will update this report if we do.)