Is suicide the cause of 1 in 10 unnatural teen deaths in South Africa? 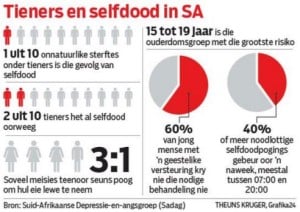 Reporting on the tragic death of a 14-year-old girl in Johannesburg, Afrikaans newspaper Beeld published a front page infographic stating that “1 in 10 unnatural deaths among teenagers are due to suicide”.

The paper listed the South African Depression and Anxiety Group (SADAG) as their source. The group’s spokesman, Cassey Chambers, told Africa Check the statistic was from a 2012 academic paper by Lourens Schlebusch, emeritus professor of behavioural medicine at the University of KwaZulu-Natal.

In the paper, Schlebusch wrote: “On average 9.5% of non-natural deaths in young people are due to suicide”. The source for this was not clear and Schlebusch referred Africa Check to his 2005 book Suicidal Behaviour in South Africa. Here he referenced a 2002 sample study of post-mortems by the Medical Research Council (MRC), but this study was not nationally representative as it only included data from six provinces.

As Africa Check previously reported, the most recent nationally representative data on suicide is the MRC’s Injury Mortality Survey, which is based on 2009 mortuary data.

Does S. Africa rank 8th in the world by suicide rate?