The image is gruesome. Blood-spattered bodies are strewn along a highway, passengers of a bus that never reached its destination. Messages on social media and apps say they were victims of herdsmen from Nigeria’s Fulani community.

The messages seemed to have credence, containing a signed security alert from an unnamed school, a sound clip of a witness to the said attacks and the photo showing the mutilated bodies, supposedly on one of Nigeria’s busiest roads.

But the Nigerian police dismissed reports of any attacks, terming them “fake news by a faceless group of students”.

Latest use of old pic misleading 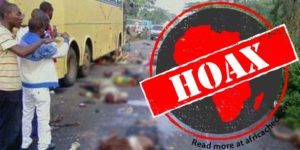 Image was cropped and blurred due to its graphic nature.

The Fulani have been in the news since the start of 2018, when scores of killings were attributed to suspected militant herdsmen. The purported attacks along the Lagos-Ibadan expressway further compounded political and social tension around the issue in Nigeria.

But it’s not the first time this particular image has surfaced online. Using TinEye, a reverse image search engine, Africa Check found that the image has been in circulation for at least eight years.

In a March 2010 online newspaper opinion article, it was used to allege that Nigerian bus drivers were being forced to offer blood sacrifices of their passengers.

The picture again showed up that month in an unverified post on CNN’s iReport. In the intervening years, it was attributed to an accident scene in August 2011 and in 2014 used as “graphic evidence” of Christian genocide in Nigeria by an American author.

The image has also been used as proof of rising sectarian violence prior to the 2015 elections. While others simply shared the gory image, some online readers did point out that it was an old picture.

While it is difficult to say when exactly the picture was taken or posted, reverse image searches show it is old and its latest use is misleading. - David Ajikobi (09/02/2017)