White giraffes? Yes, this rare type lives in a conservancy in north-eastern Kenya

A viral post linking to an article about rare white giraffes is racking up views online. A 2017 National Geographic video in the article shows two pale animals etched against the African bush.

And the questions are piling up. Are the giraffes still around? What causes their condition? How rare is it? 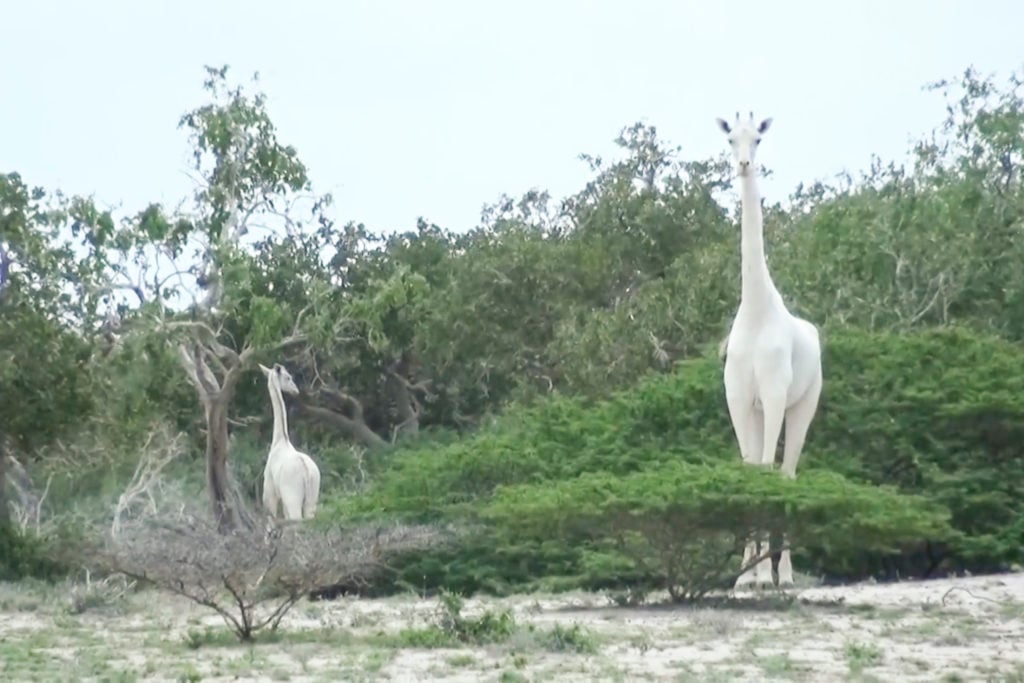 The extremely rare white giraffe and her calf are seen in this May 2017 video screengrab. Scientists say they are a 'very rare' phenomenon. They are found in Garissa county’s Ishaqbini Hirola Conservancy in Kenya and were last sighted in September 2018. Photo: HIROLA CONSERVANCY/CATERS NEWS AGENCY

A mother and calf

The video was shot in Garissa county’s Ishaqbini Hirola Conservancy, part of the Northern Rangelands Trust’s cluster of 35 community conservancies in northern Kenya.

The conservancy’s manager, Ahmed Noor Abdimaalim, told Africa Check that the two rare giraffes were most recently sighted on 27 September 2018.

“The two were in a group of five giraffes.”

“When there is a visitor who is interested in them, we will assign some of our rangers to go out and track the animals. There are specific corridors where these giraffes pass through, and once our rangers spot them, we can contact the visitor and direct them to where these are.”

‘Leucism is not albinism’ 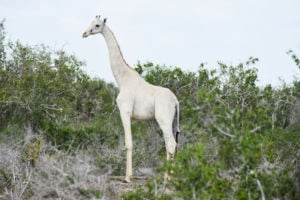 White giraffes are a “very rare phenomenon”, said Dr Shadrack Ngene, assistant director of the Species Conservation and Management division at the Kenya Wildlife Service, the state wildlife conservation agency. Their condition is called leucism and is caused by genetic mutation, he told Africa Check.

“Leucism is an abnormal condition of reduced pigmentation affecting various animals (such as birds, mammals, and reptiles) that is marked by overall pale colour or patches of reduced colouring,” Ngene said.

“Leucism is not albinism, however. Animals with albinism produce no melanin throughout their entire bodies. Animals with leucism may have darker pigment in their soft tissue, and their eyes retain a normal colour. The eyes of animals with albinism are usually red.” (Note: A 2016 study by British academic Zoe Muller discusses the phenomenon exhaustively.)

White giraffes at risk in the wild

Animals with leucism are rare as they are less hidden from predators and prone to skin cancer.

“Most times animals with this condition do not survive for long in the wild as they are easily predated upon as they stand out of their herds,” Ngene said.

So it’s good news that the mother giraffe has survived to adulthood and given birth to a calf that is now nearly two years old. - Alphonce Shiundu (18/10/2018)