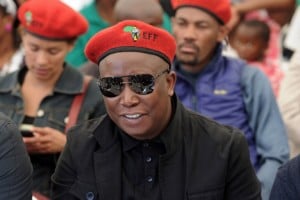 The Economic Freedom Fighters (EFF), a fledgling South African political party, claims to have amassed a staggering 400,000 paid-up members since its launch five months ago. By comparison, the country’s dominant political party, the African National Congress, lays claim to an audited membership of just over 1,2-million. The opposition Democratic Alliance does not release its membership figures, saying it regards them as confidential.

This week the EFF’s controversial leader, Julius Malema, boasted that he could prove the party had “more than” 400,000 members.

“I am a man of detail,” he told PowerFM radio host Chris Vick. “Those who work with me…will tell you that I don’t believe in hearsay. We want tangible proof. Our already counted 400,000 members is a scientific, practical… Yes, proof that we’ve got paid-up members, you know more than 400,000.”

The claim is one that Malema has made with some regularity in recent weeks and it has been widely reported on various news websites including The Times, Eyewitness News, The Star and Business Day.

So can he prove it?

Africa Check asked EFF spokesperson Mbuyiseni Ndlozi what “tangible proof” the party had to back its claim. He said he was unable to provide any documentation or evidence to support Malema’s claim. “At the moment the counting is dependent on the administrators in the offices,” he said. Ndlozi claimed that the numbers were currently being audited and would be released in “due time”.
In the absence of tangible proof – scientific, practical or otherwise – the EFF’s stated membership figures have little value and cannot be regarded as credible. – Africa Check 30/01/14.