Why strike cost estimates should be treated with caution 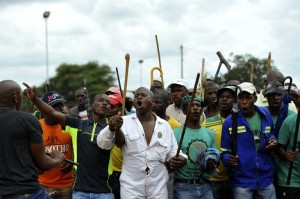 The chief economist for South Africa’s Chamber of Mines has reportedly claimed that strikes in the platinum sector are costing the South African economy R400-million a day.

According to Mining Weekly, Roger Baxter told delegates at the African Mining Indaba in Cape Town this week: “The strikes are costing the industry about R197-million a day. That is just the direct revenue costs and excludes all multipliers. We estimate the daily cost to the country is closer to R400-million a day.”
The claim was widely reported, appearing on the websites of the Mail and Guardian, Bloomberg News, Eyewitness News and The New Age, among others.

Africa Check asked Baxter and the Chamber of Mines how the estimates were calculated and what evidence they had to support the claim. Neither responded and we have been unable to independently assess the models and calculations used.

But estimates like these should be treated with caution. In a report published last year, we found that estimated costs of strike action to the economy are almost always flawed and should be taken with a large pinch of salt. (You can read that more detailed report here)

There are a number of reasons for this.

Often, the estimates are not calculated independently. The Chamber of Mines is an “industry employers' organisation which exists to serve its members and promote their interests”. Charmaine Russell, speaking on behalf of the organisation, told Africa Check last year that loss estimates are “used to illustrate the industry’s concerns”.

The estimates also don’t take into account existing stockpiles in the platinum sector. Market analyst Sasha Naryshkine told Africa Check that the platinum sector has stockpiles that can last about four weeks. These stockpiles can allow processing to continue in the event of a strike, preventing the mines' operations from coming to a standstill.

And labour relations consultant, Andrew Levy, commented: “There are numerous losses to take into account – both direct and indirect. The media publish the estimates because they will interest the public but they are not accurate.” - Africa Check 05/02/14

Note: This  Spot Check has been updated. An earlier version stated that Baxter's claim that platinum strikes were costing South Africa R400-million a day was unreliable. We have not been able to independently interrogate Baxter's calculations or models and therefore, cannot make such an assessment.