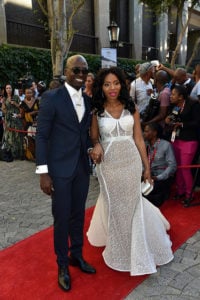 Minister Malusi Gigaba arrives with his wife Norma at the opening of parliament in February 2017. Photo: GCIS

The wife of South Africa’s treasury minister has made headlines for her expensive international travel bill.

News media reported that minister Malusi Gigaba’s wife, Norma, has accompanied him on numerous official international business trips in 2017. The cost for her to accompany her husband to the United States, Shanghai, London and Germany has been pegged at over R500,000.

The 2007 version of South Africa’s ministerial handbook does allow for cabinet members’ spouses to accompany them on official international trips and for the pair to fly first class. If the minister doesn’t have a spouse (or their spouse is unable to accompany them) they may take along an “adult family member”.

“The costs for official journeys abroad by members, and their spouses or adult family members accompanying them in official capacity, are for the account of the relevant department,” the handbook notes.

Ministers have to foot the bill for their dependent children, however.

Which handbook sets the rules?

The ministerial handbook and its perks are pretty murky. Africa Check has attempted numerous times to determine what version of the handbook is currently in use.

Cabinet ministers were downgraded in October 2013 when then minister of finance Pravin Gordhan announced that they would be expected to slum it in business class when they flew internationally. Gordhan also announced a host of other changes, including reducing ministers’ car allowances.

That same year, then Minister in the Presidency Collins Chabane promised that the amended handbook would soon be public knowledge.

A year later nothing had been released.

In 2014, spokesman at the department of public service and administration, Brent Simons, told Africa Check that the amended handbook was with the presidency and was going to be discussed with cabinet. But in 2016 it was reported that cabinet was yet to lay eyes on the document.

We tried following up today to check where the handbook was and when it was expected to be published. Our calls and text messages to the department of public service and administration were not answered. - Kate Wilkinson (06/10/2017)