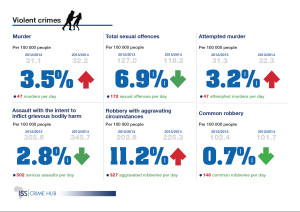 Crime statistics released by the South African Police Service last month showed that the country’s murder rate had increased for the second year in a row. Between April 1, 2013, and March 31, 2014, a total of 17,068 people were murdered. The previous year’s murder toll was 16,259, around 1,500 more than the United States’ figure for 2012, the last year for which the US has released official data.

The claim that South Africa’s murder rate is seven times higher than the United States’ is therefore correct when rounded to the nearest whole figure. - 29/10/2014

A guide to understanding crime statistics in South Africa