Is Zambia 'a nation of drunks'?

Zambia has become a “nation of drunks”, with too many bars and people drinking beer.

The Post newspaper quoted former finance minister Ng’andu Magande as saying this in reaction to the country’s 2016 budget in which present finance minister Alexander Chikwanda reduced the tax on clear beer from 60% to 40%.

“[T]hat tax is unlikely to be passed on to the consumers,” Magande was reported to have said, “so it means people who are making the beer are still going to get a bumper harvest, then they will even get more beer and more beer means there will be more drunkards! And the more drunkards we have in the country, the less productivity and the less productivity, the more the poverty. And that is not how, I think, the vision of a country should be.”

But available data does not back up Magande’s picture of a nation of drunks. According to the World Health Organisation’s 2014 global status report on alcohol and health, in 2010 nearly 60% of Zambians older than 15 were lifetime abstainers (46.4% of men and 73.1% of women).

Reported alcohol use per Zambian older than 15 dropped sharply between 1973 and 2010. Clear beer only made up 23% of the per capita consumption, with most alcohol users drinking fermented beer (61%).

Still, of the Zambian men that drank in 2010, 10% drank heavily in the month before they were surveyed (more than 60g of pure alcohol - or about five cans of clear beer - in one session) which put them at risk of disease and injury. 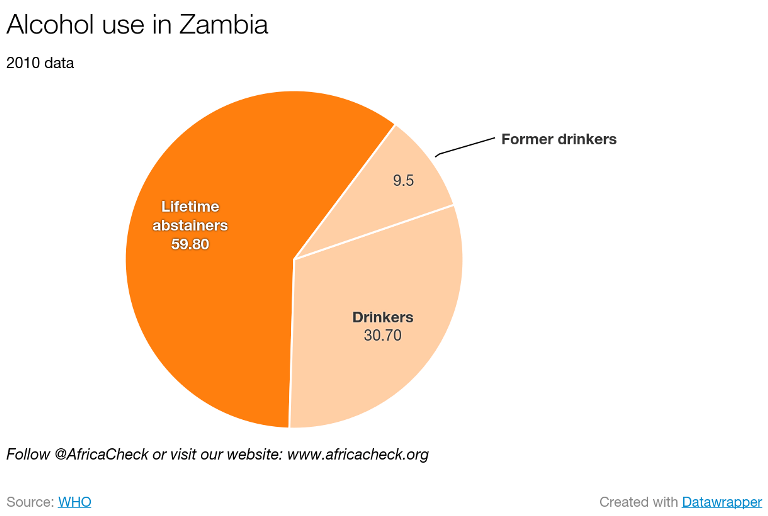 Is Africa the drunk continent? How Time Magazine ignored the data