South Africa’s President Jacob Zuma repeated a debunked answer to this question at the opening of an energy conference.

“Over the past 23 years of our democracy, we have been able to increase [electricity] access from a mere 34% to 85% of our population,” claimed Zuma.

The figure of 34% is most probably from 1990 or 1991, experts previously told Africa Check, but there is no credible data available for the dawn of South Africa’s democracy. 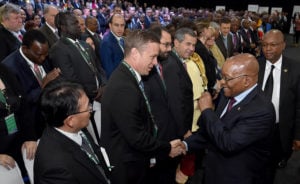 Between 1993 and 1994 the Southern Africa Labour Development Research Unit conducted a national survey which found that 53.6% of households had access to electricity.

South Africa’s national statistics agency, Statistics South Africa, conducted a census in 1996 which estimated that 58.2% of households in South Africa had access to electricity. The latest data from the agency shows that access increased to 84.2% in 2016.

Access to electricity in South Africa during the early 1990s was low. It was also unequal, with just 38.5% of black households having had access in 1993/94, compared to basically all white households (99.8%).

However, by citing a lower and unsubstantiated figure, Zuma exaggerated the roll-out of services by the ANC-government since 1994. - Kate Wilkinson (07/12/2017)