Published on 25 October 2019
Can apricot seeds kill cancer cells, without any side effects? A meme shared on Facebook in South Africa says they can.

The meme’s long description claims apricot seeds contain “vitamin B17” –  “known as amygdalin or laetrile”.  It says studies show this substance has anti-cancer and anti-inflammatory properties.

The meme appears to be credited to an organisation or website called “cancergladiators.com”, but this website is no longer live.

Is the claim about apricot kernels true? 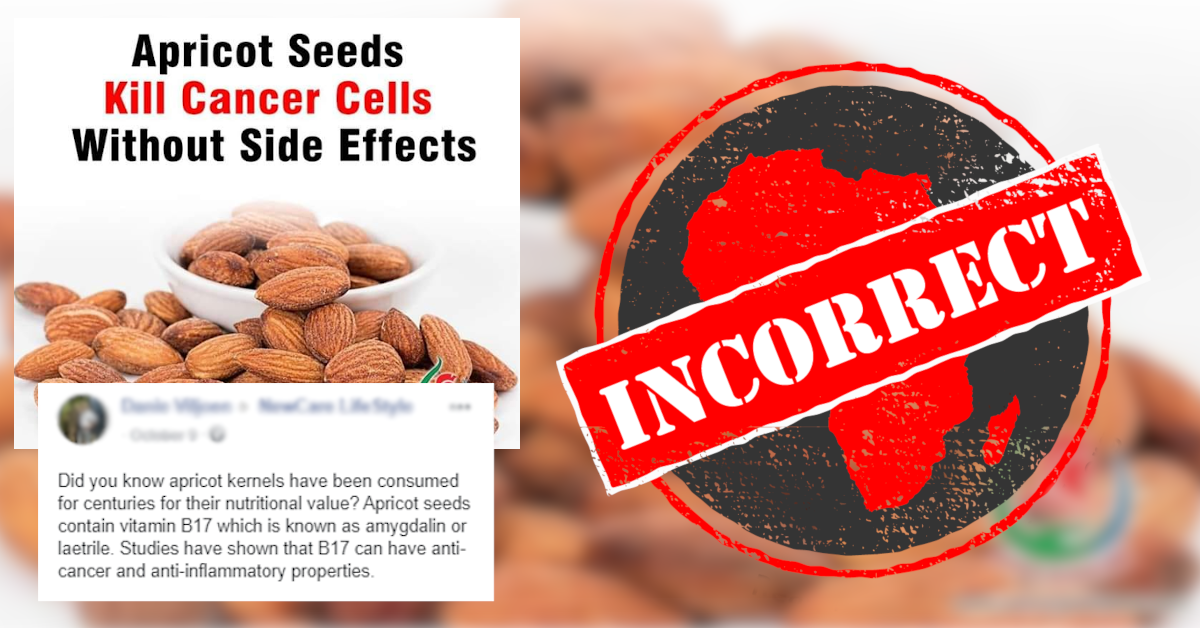 Theories behind the claim

According to the Dana-Farber Cancer Institute, an affiliate of Harvard Medical School in the US, the idea that apricot pits can fight cancer “arose because apricot pits contain a substance called amygdalin, which is broken down by the body to produce hydrogen cyanide”.

One of the supposed theories behind the cancer-fighting rumours of apricot kernels is that hydrogen cyanide is poisonous to cancer cells.

Other versions claim that cancer is a result of vitamin deficiency, but amygdalin “can restore the body to health” or “boosts the immune system to fight cancer”.

But there isn’t any “scientific evidence that laetrile [amygdalin or vitamin B17] is an effective treatment for cancer or any other illness”, as Cancer Research UK also says.

‘Laetrile has shown no anticancer activity in human clinical trials’

According to the US’s National Cancer Institute, laetrile or amygdalin, which is found in the pits of many fruits, including apples and apricots, was used as a cancer treatment in Russia from 1845, and in the United States in the 1920s.

And consuming amygdalin can lead to cyanide poisoning, effects of which include “liver damage, difficulty walking (caused by damaged nerves), fever, coma, and death”.

According to a review of all clinical studies done on the subject, published in the Cochrane Database of Systematic Reviews in 2015 and updated in 2018, “there is a considerable risk of serious adverse effects from cyanide poisoning after laetrile or amygdalin, especially after oral ingestion”.

The authors conclude that “the risk–benefit balance of laetrile or amygdalin as a treatment for cancer is… unambiguously negative”.

US and French authorities caution against amygdalin

The United States Food and Drug Administration (FDA) also does not approve of amygdalin as a form of cancer treatment.

The French agency for food, environmental and occupational health and safety, Anses, identified several cases of apricot kernel poisoning in France in 2018.

Anses warned that “consuming high doses of these kernels can lead to symptoms of acute poisoning”.

A factsheet by the Cancer Association of South Africa also says that there is no scientific evidence “to support claims that laetrile or amygdalin can treat cancer or any other illness”.

CANSA recommends that patients should not replace conventional cancer treatment with any type of alternative cancer therapy. – Taryn Willows