Are you affected by ‘aphelion phenomenon’? Almost certainly not

“Starting tomorrow at 05.27 we will experience the APHELION PHENOMENON” warns a message posted many times on Facebook and messaging app WhatsApp on 10 April 2022.

It warns that because of the “aphelion phenomenon”, when Earth is the furthest from the sun, “we will experience cold weather more than the previous cold weather, which will have an impact on flu, cough, shortness of breath, etc”.

But how much of this is true? We explored the very real phenomenon of aphelion, and how much it affects life on Earth. 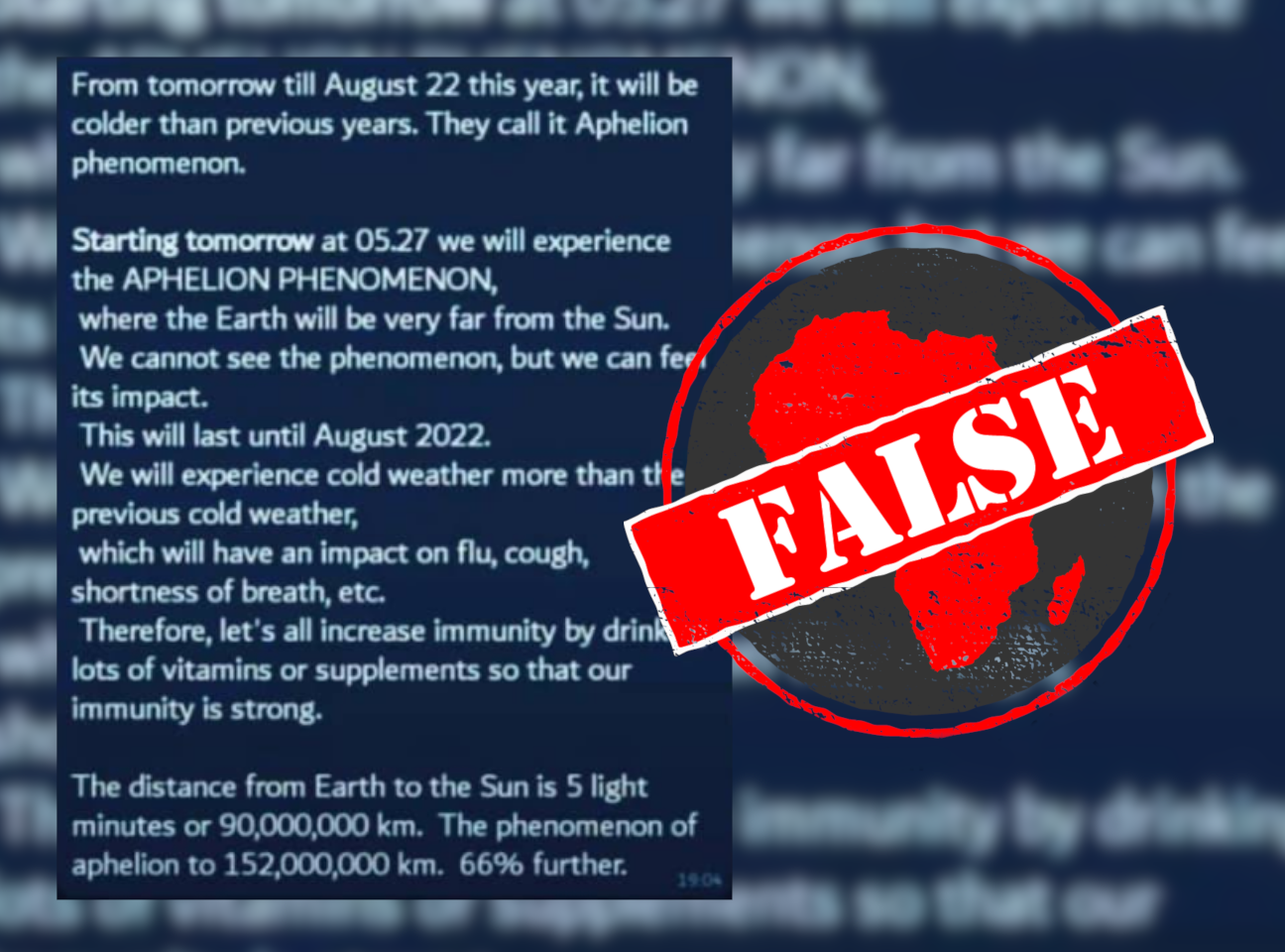 Aphelion happens annually, not unique to 2022

As Britannica explains, an object’s aphelion is the point in its orbit around the sun when it is furthest away from the sun. This happens because these orbits are not perfectly circular.

As a result, Earth is sometimes closer, and sometimes further away from the sun. The closest point is known as the Earth’s perihelion.

Both perihelion and aphelion happen once a year, and there is nothing unusual about Earth’s aphelion in 2022. So the southern hemisphere won’t be experiencing “cold weather more than the previous cold weather” as it enters winter.

Aphelion does not influence weather on Earth

The message posted on social media gets a number of facts about aphelion wrong.

It claims: “The distance from Earth to the Sun is 5 light minutes or 90,000,000 km.” But the Earth is roughly 150 million kilometres from the sun, according to the US National Aeronautics and Space Administration, or Nasa.

This is approximately the distance that light can travel through a vacuum in eight minutes, or eight “light minutes”. It is much further than the viral message claims.

The message also claims that during aphelion Earth moves up to 152 million kilometres away from the sun, or “66% further”. This is also wrong, on multiple counts.

AccuWeather did add that this might be different on other planets: “When Mars is at perihelion, the planet is warmer and its signature dust storms are more frequent and longer lasting.”

In response to a question from the public, the University of Southern Maine’s planetarium said: “The way aphelion does affect our weather is duration.”

Earth passes through several important points in its orbit. Its two solstices are the points at which one hemisphere experiences its longest day and shortest night, and the other the opposite. The equinoxes are the points when the length of day and night are equal everywhere on Earth.

But this does not mean that winters are colder in the southern hemisphere.

Having more large land masses and less water causes the northern hemisphere to experience both warmer summers and colder winters. These are factors which influence weather patterns – not the Earth’s furthest distance from the sun.