A three-minute video circulating on Facebook in January 2021 shows heavy wind and rain hitting a settlement, blowing the roofs off houses and buildings. People can be seen struggling to stand, with some being blown off their feet by the strong wind.

A voiceover warns in isiZulu that a storm will hit Mozambique on “Sunday”, and then move on to the South African provinces of Limpopo and Mpumalanga.

It says people should stay at home or find solid structures where they can wait out the storm. The narrator adds that the storm will hit at 400 kilometres an hour, blowing away houses, uprooting trees and damaging bridges.

Tropical cyclone Eloise first made landfall in Mozambique on 23 January 2021. It caused damage in several districts in Mozambique’s Sofala province.

The cyclone has since weakened into an overland depression and moved over South Africa, bringing heavy rainfall to the northern parts of the country.

The video is a compilation of shorter clips. We looked at several frames to check whether any of the footage really showed cyclone Eloise in Mozambique. Here’s what we found.

Clip 1: Origin unknown but safe to assume not Cyclone Eloise

The first clip shows the long funnel of a tornado – the thin tube between a cloud and the ground.

The US National Weather Service defines a tornado as a violently rotating column of air touching the ground, usually attached to the base of a thunderstorm.

This is not the same as a tropical cyclone, which is a rotating low-pressure weather system that has organised thunderstorms but no fronts.

A reverse image search for a screenshot of the clip did not return any results and we were unable to verify its exact origin. But there’s no evidence to suggest that this storm took place in Mozambique.

There has been extensive media coverage of cyclone Eloise and there are no credible reports linking it with the clip in the Facebook video. 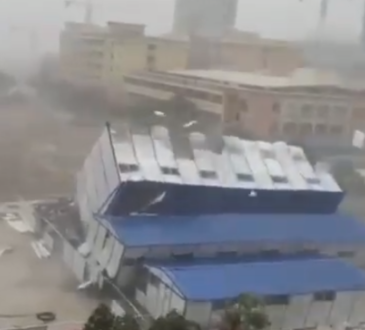 The second clip shows three blue- roofed rectangular buildings. They appear to be temporary or prefab structures. In the video, one of the buildings blows over, crushing the second and third buildings.

Both Google and TinEye reverse image searches returned several results suggesting the video was taken in the southern Chinese city of Shenzhen during typhoon Mangkhut in 2018, a severe storm that made landfall in the Philippines before moving to Hong Kong.

So the second clip could not be of cyclone Eloise in Mozambique in 2021. 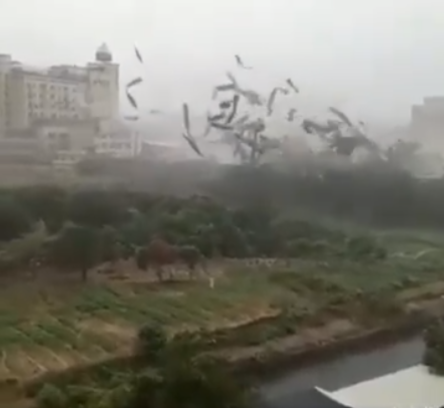 The third clip shows a grassy area with a tall building in the background. The roof of a building blows off, and pieces of it are scattered over the grass.

A reverse image search returned only one result, from October 2017, suggesting the video was taken in Puerto Rico, a Caribbean island.

In September 2017, Puerto Rico was hit by hurricane Maria, a storm that killed at least nine people and left the entire island without power.

While Africa Check was unable to find the exact origin of the video, the fact that it has been online since 2017 means that it also can’t show cyclone Eloise in 2021.

The fourth clip shows several people unable to remain upright due to strong blowing winds. A dark-walled building is in the background.

One obvious clue that this clip is not from Mozambique is that the people in it appear to be of Asian descent. To be sure, we did a reverse image search using a screenshot from the clip and found results from as far back as 2017. Again, this clip cannot show cyclone Eloise in 2021. 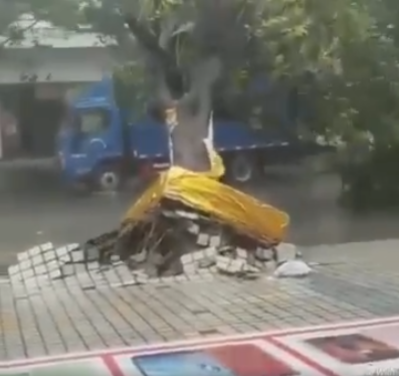 The fifth clip shows strong winds causing several trees to bend. It also shows a large tree being uprooted from a brick pavement.

A reverse image search returned one result, showing that the clip has been online since 2017.

While cyclone Eloise did cause damage in Mozambique, sharing old videos can cause unnecessary panic and fear. It’s best to follow credible sources for accurate information on severe weather.