Deadly thermobaric bomb in Ukraine? No, 2015 chemical explosion in China

“Thermobaric bomb, dropped in Ukraine,” begins the caption of a video posted on Facebook in March 2022.

The video shows a sudden explosion over a city skyline at night. A series of increasingly larger and louder explosions follow, with fireballs reaching into the sky.

The voices of a man and a woman are heard, in English. At first they only sound alarmed but just a minute later the video records their terror as they run for cover.

The video’s caption adds that a thermobaric bomb is “the most powerful weapon, after the current nuclear ones. It detonates in two stages. The first explodes with less force and automatically triggers the other, more powerful.”

The bombs are indeed rivalled only by nuclear devices. And they do have two explosions: the first releases a cloud of explosive material and the second ignites it. The oxygen in the air accelerates the explosion.

Thermobaric bombs are said to be capable of vaporising bodies and kill over a wide area by sucking air out of people’s lungs.

Mobile Russian thermobaric rocket launchers, massive tank-like machines called “flame throwers”, have been reported to be part of the invasion force in the country’s new assault on Ukraine. And Russia has reportedly admitted that it has used thermobaric weapons in Ukraine.

But does the video really show a thermobaric bomb “dropped in Ukraine”? 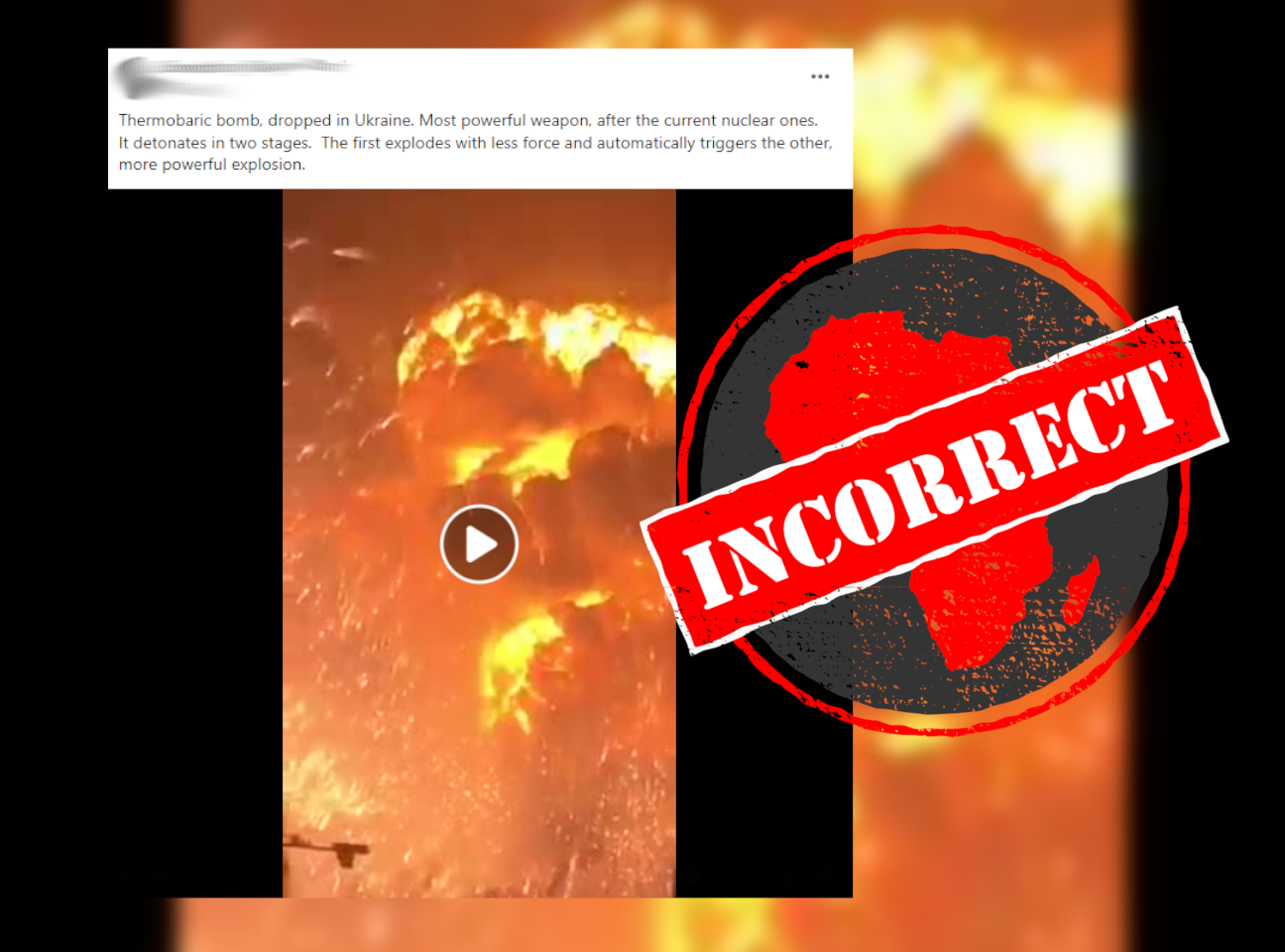 The video is almost seven years old and a well-known document of a disaster that hit China’s northeastern port city of Tianjin – just a few kilometres south of Beijing – in August 2015.

The details are sketchy. But it does seem that hundreds of tonnes of ammonium nitrate stored at a container station in Tianjin’s Binhai New Area exploded in just 60 seconds on the night of 12 August 2015.

In 2020, an even larger explosion of stored ammonium nitrate destroyed large parts of Beirut, the historic capital of Lebanon.

The video on Facebook was shot by Dan Van Duren, an aircraft mechanic from the US, in the Tianjin apartment he shared with his girlfriend who news reports identify only as Ying. It is their voices we hear in the clip.

Here’s the UK Guardian’s description of the video on 15 August 2015:

A video filmed by stunned eyewitness, Dan Van Duren, captures the moment successive huge blasts tore through an industrial area in the Chinese port city of Tianjin on Wednesday. The explosions took place where toxic chemicals and gas were stored, and killed at least 55 people, including firefighters. The blasts were so large they were seen by satellites in space.

The final death toll was reported to be 173.

The video was captured by chance, as Van Duren was filming the night sky while he and Ying awaited a meteor shower.

NBC News interviewed Van Duren after the disaster, in a video that takes viewers through his and Ying’s wrecked apartment.

“I can’t even believe this has happened,” a visibly upset Van Duren says. “It blew out all the windows, and they are heavy windows."