False connections: Wuhan research lab not owned by GlaxoSmithKline, which doesn’t own Pfizer, and more ...

Disclosure: The Open Society Foundations and Bill and Melinda Gates Foundation are among Africa Check’s funders, which together provided 21% of our income in 2019.

“The Chinese biological laboratory in Wuhan is owned by Glaxosmithkline,” claims a message that has been posted several times on Facebook.

It goes on to say that the drug company GlaxoSmithKline owns Pfizer, another pharma firm. Pfizer has produced a vaccine against the new coronavirus, which was first documented in Wuhan, China in late 2019.

The post then links these companies to other high profile targets of conspiracy theories about the Covid-19 pandemic, including Microsoft founder Bill Gates and Dr Anthony Fauci, head of the US National Institute of Allergy and Infectious Diseases.

It implies that the people, companies and organisations named are somehow responsible for the Covid-19 pandemic. It twice notes that Pfizer has developed a vaccine for the disease. But are all of these connections really true? 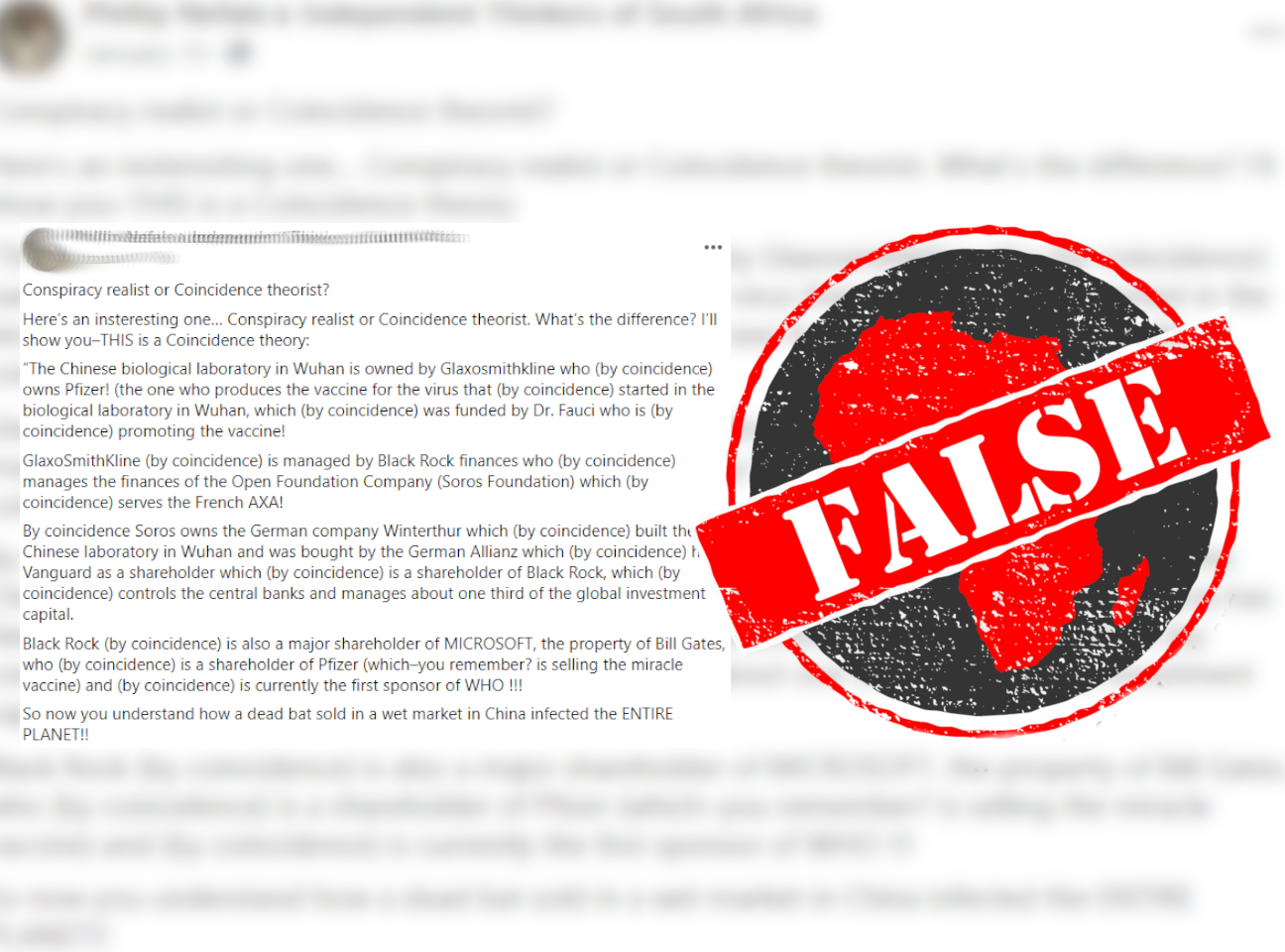 It isn’t clear when the claim first appeared, but Africa Check found examples of it posted as early as November of 2020. It was debunked in December by fact-checkers at Reuters (twice) and the Australian Associated Press.

The post’s central claim is that the Covid-19 pandemic “started in the biological laboratory in Wuhan”, which is connected via GlaxoSmithKline (GSK) to Pfizer. But this is not true.

To begin with, there is no evidence that Covid-19 “started in the biological laboratory in Wuhan”. This theory has been dismissed by health experts who believe the disease likely crossed from bats to humans, likely via another animal species.

There is no connection between the Wuhan Institute of Virology and GSK. The institute does not list GSK as a partner on its website, which says it was founded and is run by the Chinese Academy of Sciences.

And GSK does not own Pfizer. In 2018, the two companies announced that they would be combining their consumer healthcare branches into a new entity to be 68% owned by GSK. But the two companies are otherwise independent, and the merger did not include the research and development, or vaccine, branches of either company.

But this is not the only connection the Facebook post is wrong about. Most of the connections listed don’t seem to exist at all, and others are misleading. So here are all the connections it mentions, and the evidence Africa Check could find for them (or more often, against them).

Many more missing links in the chain

The Wuhan Institute of Virology is not funded by Dr Anthony Fauci. As Reuters explains, the closest thing to truth here is that between 2015 and 2019 the institute was granted funding by a non-profit organisation partially funded by the US National Institutes of Health, of which the Fauci-led National Institute of Allergy and Infectious Diseases is a part. 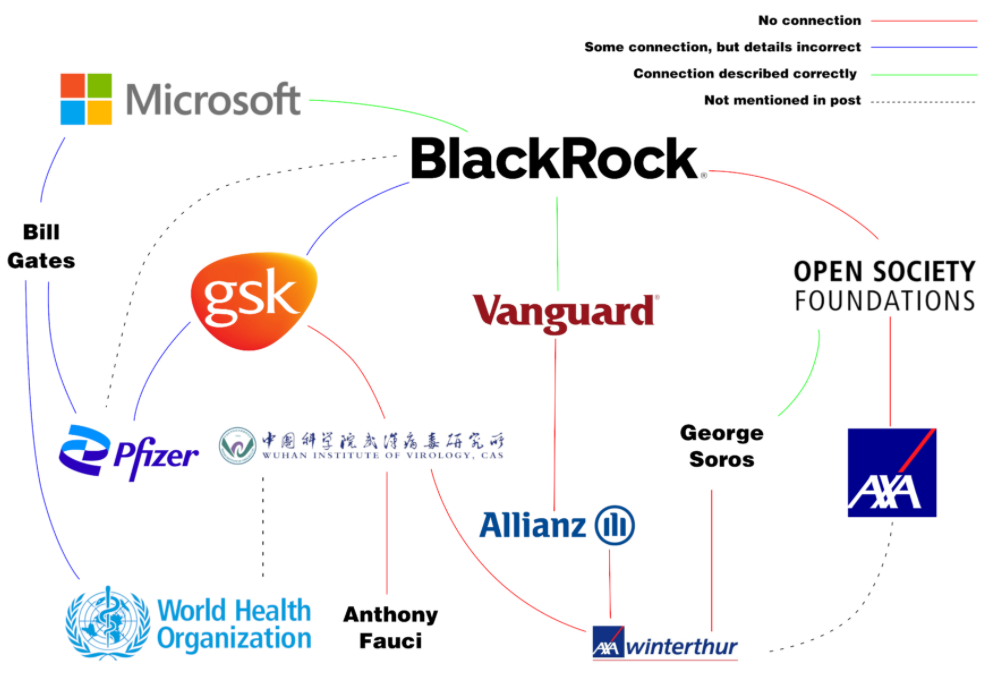 Both BlackRock and Vanguard own stock in GSK (BlackRock owns 7.5% of the stock) although they are only two among 1,528 different institutions that own GSK shares. And this does not mean that GSK is “managed by Black Rock”, which it is not.

Nor does BlackRock manage the funds of the Open Society Foundations. Open Society is entirely funded by its founder and chair, George Soros. There is also nothing to indicate that the organisation “serves the French AXA”.

French insurance company AXA does not mention the Open Society Foundations in its organisational charts, and there is no evidence that the company has received any Open Society grants or other funding.

In 2006, AXA did acquire Swiss company Winterthur, which the Facebook post incorrectly claims is owned by Soros.

The US Securities Exchange Commission documents around 3,000 company filings per day in its Electronic Data Gathering, Analysis, and Research (Edgar) library.

These indicate that, while there are connections between the Vanguard group and BlackRock (most recently filings revealing that BlackRock owns 14.6% of the American Vanguard Corporation stock), Vanguard has no connection to Allianz SE (headquartered in Germany), and Allianz mentions AXA only as a competitor (not a subsidiary).

BlackRock also owns more than 5% of Microsoft stock, suggesting that it is (as the Facebook post claims) a “major shareholder”. But the post is wrong to call Microsoft “the property of” founder Bill Gates. Gates has not been the majority owner of Microsoft since 2014, and is no longer on its board.

Gates himself does not seem to be a shareholder of Pfizer, but the Bill and Melinda Gates Foundation did pay a grant to Pfizer in 2019 for pneumonia research, according to the foundation’s tax returns. Similarly, Gates is not the largest funder of the World Health Organization, but the Gates foundation was the WHO’s largest contributor as of the fourth quarter of 2020.