“Four US biolabs operate in Nigeria, where monkeypox came from,” reads a headline on the Tass website, in an article dated 27 May 2022. It credits the information to Igor Kirillov, head of the Russian defence ministry’s “Nuclear, Chemical and Biological Protection troops”.

Tass is a news agency owned by the Russian state. Since Russia’s 24 February invasion of Ukraine, most independent news sources inside Russia have been shut down. This has left news reporting in the hands of state-owned or state-controlled outlets such as Tass.

“According to the WHO, the monkeypox pathogen strain was imported from Nigeria, where the US deployed its biological infrastructure,” the article reads. The WHO is the World Health Organization.

Tass quotes Kirillov as saying: “According to the available information, at least four US-controlled biolaboratories operate in Nigeria.” He adds that this is a “strange coincidence that requires additional inspection by specialists”.

The article has been copied and pasted on blogs, tweets and several Facebook posts.

In another Tass article posted on the same day, Kirillov says the US-funded biolabs are in the Nigerian cities of Abuja, Zaria and Lagos.

Russia has called on the WHO to investigate the labs, he says, “against the background of numerous cases of US violations of biosafety requirements and facts of negligent storage of pathogenic biomaterials”.

The claims were reportedly also published by Sputnik News, another state-owned Russian news agency. But Africa Check has been unable to access its website. 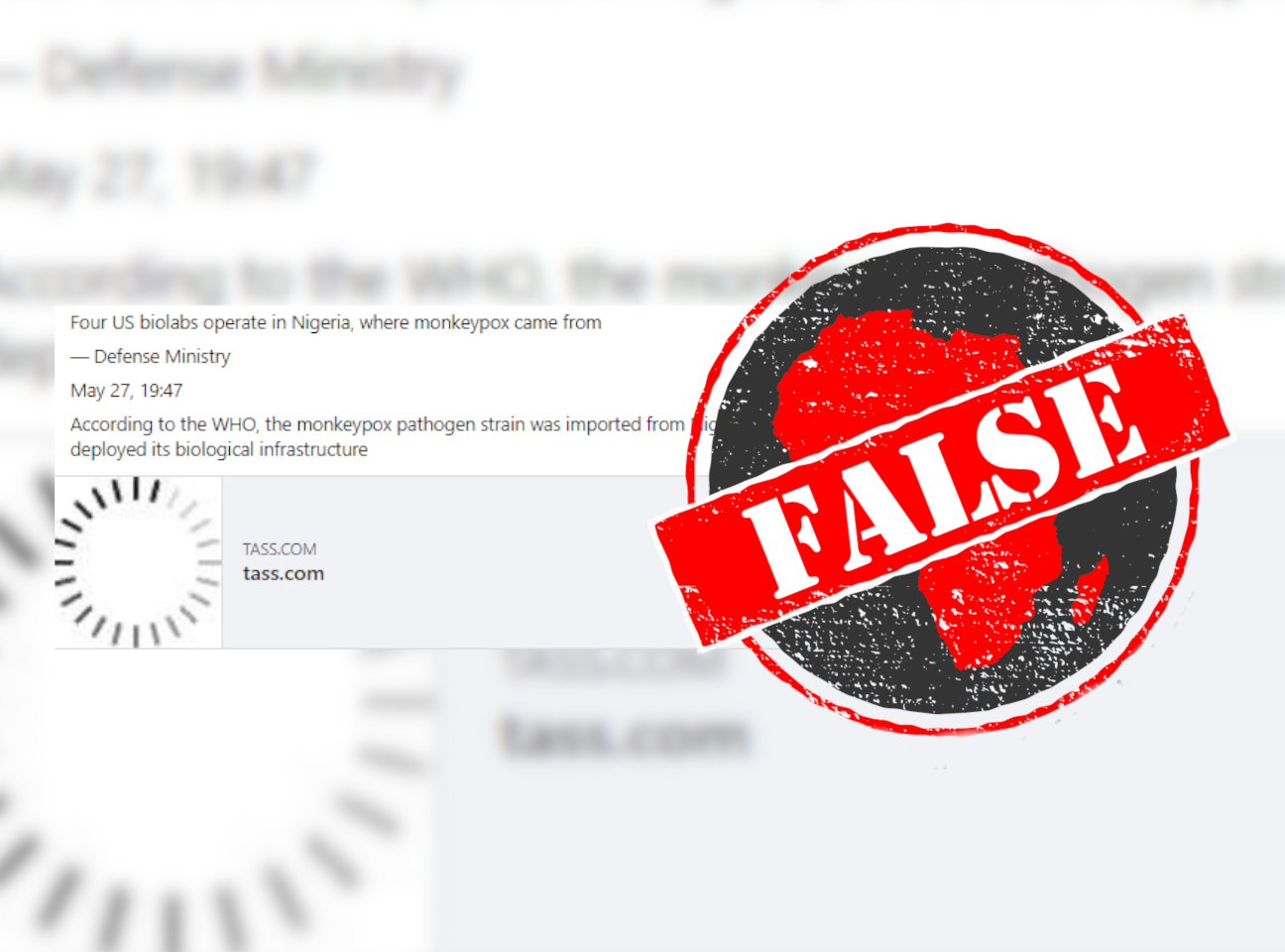 Monkeypox is a disease endemic – mainly found – in the tropical rainforest areas of central and west Africa. It is a viral disease, and zoonotic. This means it is caused by a virus that can be passed from animals, such as rodents, to people.

Symptoms of monkeypox include a fever, headache and aches in the muscles and back, swollen lymph nodes, shivering, and tiredness.

A few days after the fever, a rash appears on the face, hands and feet. The rash can then spread to other parts of the body. It eventually forms scabs, which then drop off. The disease can last for two to four weeks. In areas where it’s endemic, monkeypox is said to be fatal in one in 10 cases.

In May, several cases of monkeypox were found in 12 countries – including the USA, UK and Australia – where it isn’t endemic. By 21 May, 92 laboratory confirmed cases, and 28 suspected cases with ongoing investigations, had been reported to the WHO from the 12 countries.

And from 1 January to 29 May a total of 21 confirmed cases with one death were reported in Nigeria, one of the countries where monkeypox is endemic.

But are there really “at least four US-controlled biolaboratories” producing monkeypox in Nigeria? And has Russia asked the WHO to investigate the labs?

“Nigeria has no laboratories where monkeypox virus is generated,” he says in the statement, adding that the claims are “not backed by any evidence”.

“The designation and activities of Nigerian public health laboratories are known to the supervising authorities.” Most of the labs were funded and set up by the federal government “for diagnostic purposes, in response to the Covid-19 pandemic and other infectious diseases”.

“Some other laboratories are dedicated to the very successful HIV control programme, managed by [Nigeria’s] federal government and her partners,” Adetifa adds.

He says Nigeria “welcomes scientific cooperation with all foreign countries”, and has “received material support from the United Kingdom, Germany, Japan etc, and also discussed vaccine production with Russia”.

As for US funding, Adetifa says collaboration between Nigeria and the US has “provided opportunities for technical assistance, capacity building and provision of equipment and field hospitals at the peak of the Covid-19 pandemic”. The US has also funded health programmes for HIV and Aids, and malaria elimination.

On 30 May the US consulate in Nigeria also issued a statement, dismissing Russia’s claims as “pure fabrication”.

“These falsehoods detract from the work that the United States, in close coordination with Nigerian and multilateral partners, accomplish together on public health, including in disease surveillance, diagnosis, prevention, and control,” it reads.

The statement points out that monkeypox “is not a new disease, nor is it unique to Nigeria or this region”.

It says US government agencies working in Nigeria – such as the CDC and USAid – have “supported both national and state laboratories with technical assistance and funding”.

But the labs “are Nigerian, and US support enables them to provide essential services for the public good and the health of Nigeria’s citizens”.

WHO hasn’t received any request from Russia

And in a press briefing on 2 June, the WHO said the organisation hadn’t received any request from Russia to investigate “US biolabs” in Nigeria.

“We are aware of media reports on this question,” Matshidiso Moeti, WHO regional director for Africa, told journalists.

“We are not aware of WHO having received any request from the Russian government to investigate monkeypox and other laboratories in Nigeria.”

She added that US institutions and their international partners “have really supported the building up of laboratories in the African region”, especially during the Covid pandemic.

“So far, as far as I know, we have not received such a request from Russia. And I’m certain that when and if it is received, it will be given its proper attention.”