Six photos were posted on Twitter and Facebook in late February 2021 with the claim they show Igbo women who were detained in Suleja, a town in Nigeria’s Niger state, for asking for a referendum on Biafra’s independence from the country.

“They don't have Bandits in detention but 109 BIAFRA women are in detention in Suleja just because they are holding flags asking for REFERENDUM to determine their faith against NIGERIA,” reads a tweet posted on 26 February 2021.

They don't have Bandits in detention but 109 BIAFRA woman are in detention in Suleja just because they are holding flag asking for REFERENDUM to determined their faith against NIGERIA.@NigeriaGov must release our women @MaziNnamdiKanu @JoeBiden @amnesty pic.twitter.com/ke5hRKoYx3

The photos were posted on Facebook on the same day, with the same claim.

Biafra was a region that roughly correlates with Nigeria’s current South East geopolitical zone. In May 1967, Biafra declared its independence from the rest of the country. A civil war followed. It’s estimated that 500,000 to 3 million people died from disease, starvation and the conflict itself. Biafra’s defeat in January 1970 ended the war.

The Biafran separatist movement continues, most notably in the activism of the Indigenous People of Biafra, an organisation led by the exiled Nnamdi Kanu.

Nigeria’s South East is said to be mainly populated by Igbo people. When members of the separatist movement refer to “Biafrans”, they generally mean the Igbo.

Suleja is a town and emirate in the east of Nigeria’s Niger state, northwest of the country capital of Abuja. It is in an area said to be largely occupied by Hausa people.

But do the photos show 109 “Biafran” Igbo women detained in Suleja in late February 2021 for “holding flags asking for referendum” on Biafra’s independence? We checked. 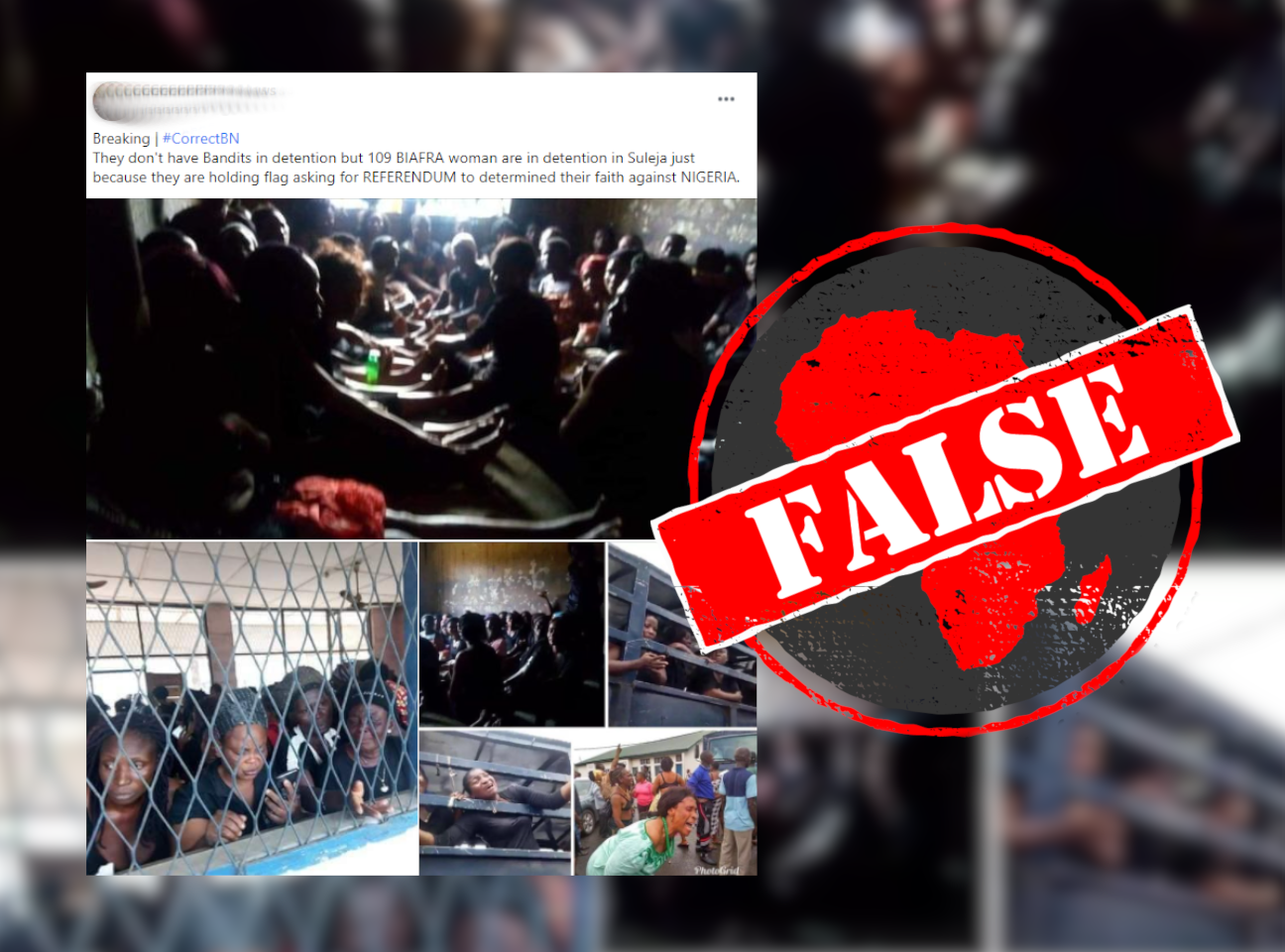 The first photo shows a crowd of women dressed in black and waving the red, gold, green and black flag of Biafra.

In the second photo, a group of women are sitting in what appears to be a jail cell. The third and fourth show women dressed in black reaching through the bars of some kind of prison transport. The fifth is of a group of seemingly agitated people standing beside a vehicle. A woman in the foreground is bent over, screaming or crying.

In the sixth photo, a large group women in black are seen in a room, looking through its barred windows. The seventh seems to show the same scene as the second – women in a cell.

Reverse image searches reveal that the photos have been online for years – and probably date to 2018.

The first appears in a 29 May 2019 post on the blog We Are Igbos. It has no caption, but the blog post is headlined: “Why all Biafrans must sit at home on 30 May 2019”. The photo is also in a post on another blog, dated 5 October 2019, with the headline: “Rivers IPOB Women Protest”. Nigeria’s Rivers state is about 600 kilometres south of Suleja.

And other photos that appear to show the same protest – women in black, waving the Biafran flag – were posted on the blog Global News City in August 2018. One woman with a beaded circlet on her head seems to be identifiable in both the February 2021 photo, and the third photo on the blog page.

Here the protest is located in Owerri, the capital of Imo state. Owerri is more than 500 kilometres south of Suleja.

The second and seventh photos, of women seemingly in a jail cell, were posted in a tweet dated 18 August 2018. Again, the location is given as Owerri.

This is how 48 IPOB women who committed no crime other than exercising their right of peaceful protest are being treated by @PoliceNG at Owerri. What a shame. Harmless women parked like sardine inside disgusting cell. pic.twitter.com/90LxrvLrO8

The third, fourth and sixth photos were tweeted by Amnesty International Nigeria – a verified Twitter account – on 10 December 2020.

The tweet reads: “In August 2018 Nigerian government unlawfully arrested 107 women - who were ill-treated by the police - for staging a peaceful protest, in Owerri Imo State. The women’s age ranged from 64-50: #HumanRightsDay.”

In August 2018 Nigerian government unlawfully arrested 107 women - who were ill-treated by the police - for staging a peaceful protest, in Owerri Imo State. The women’s age ranged from 64-50: #HumanRightsDay pic.twitter.com/LKio4tYfLw

Africa Check was unable to trace the origin of the fifth photo. But a TinEye reverse image search reveals it has been online since at least October 2018.

According to Nigerian news reports, police arrested 114 women “alleged to be members of the Indigenous People of Biafra” in Owerri on 17 August 2018. The arrests were reportedly for “unlawful assembly” and “demanding to know the whereabouts of Ipob leader Nnamdi Kanu”.

After a high court ruling, the women were released on 24 August, a week later.

The six photos were posted on Twitter and Facebook in February 2021 as evidence that Igbo women were detained for demanding a referendum on Biafra’s independence.

But the photos all date to 2018, so they can’t show events in 2021. In 2018, women alleged to be members of Ipob were detained for protesting in Owerri, in Imo state – not Suleja, Niger state – with no mention of a referendum.

All six photos are false evidence of the claim.

ANALYSIS: How pro-Biafra disinformation machine churns out fiction as facts

The deliberate and sustained seeding of incorrect information on social media would have many thinking a new state is imminent in Nigeria. N...