‘I’ll pass on that shot’? Suspicion about Covid-19 vaccines confuses how vaccines work

A message circulating on Facebook casts doubt on Covid-19 vaccines, given how quickly these potentially life-saving inoculations have been developed.

It concludes: “I’ll pass on that shot.” Another version adds: “Wake up people!!” The message has been viewed by millions of Facebook users.

A vaccine stimulates the body’s immune system to produce antibodies against viruses and bacteria that cause disease.

Vaccine hesitancy is seen as a “significant obstacle” to ending the pandemic. Is the relative speed at which Covid-19 vaccines have been developed reason to be suspicious of them?  And what of vaccines for HIV, cancer and the common cold? 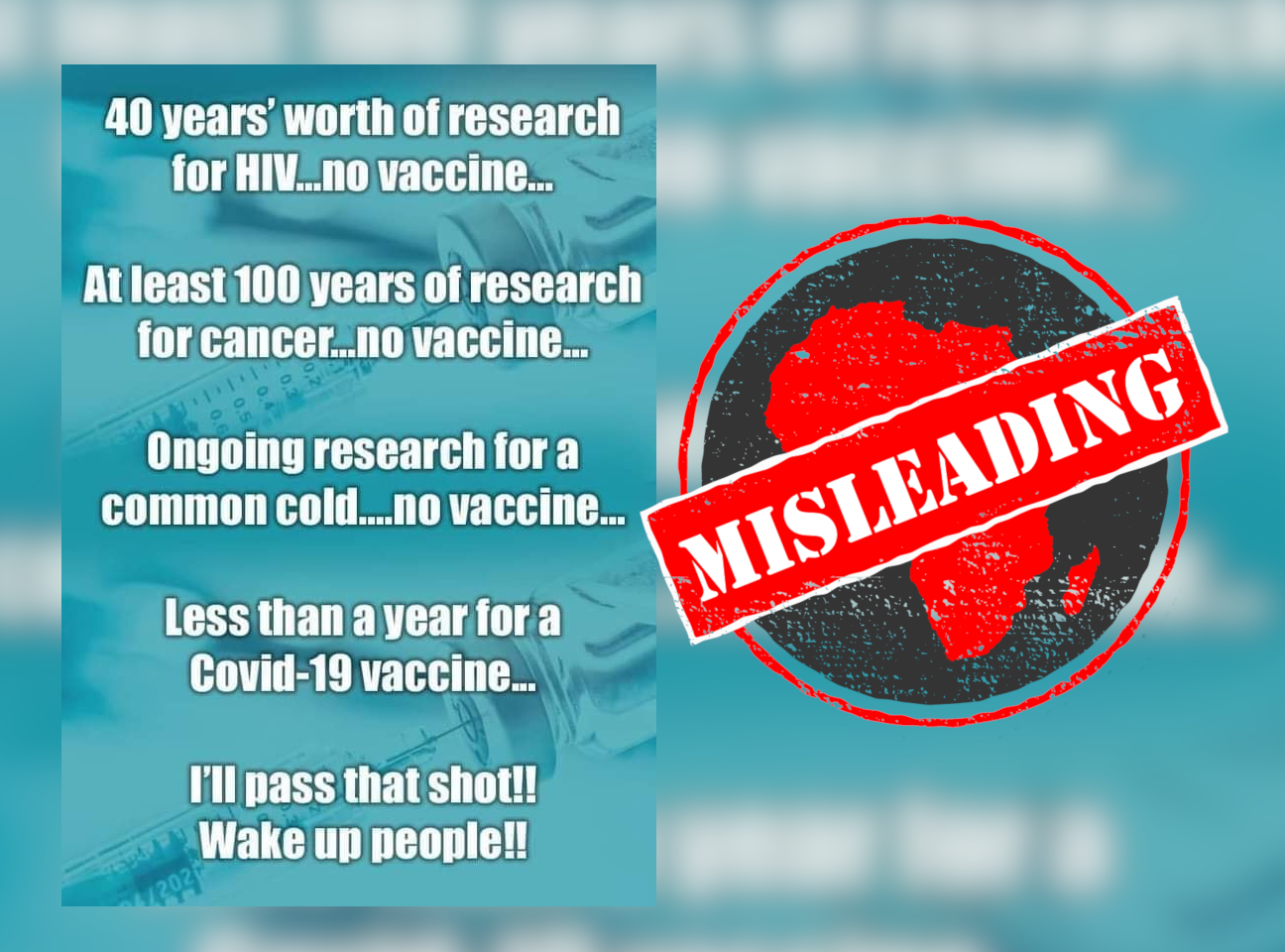 The new coronavirus that causes Covid-19 was first identified in Wuhan, China, in late December 2019.

So far, in January 2021, two Covid-19 vaccines have been approved for use in certain countries, according to the New York Times coronavirus vaccine tracker. Eight are in early or emergency use, and 82 others are still being tested and trialled.

One reason some Covid-19 vaccines have been developed relatively quickly is new technology. These are messenger RNA – or mRNA – vaccines.

Traditional vaccines “put a weakened or inactivated germ into our bodies” to trigger an immune response, the US Centers for Disease Control explains.

“Not mRNA vaccines. Instead, they teach our cells how to make a protein – or even just a piece of a protein – that triggers an immune response inside our bodies. That immune response, which produces antibodies, is what protects us from getting infected if the real virus enters our bodies.”

Prof Kayode Osagbemi, an epidemiologist at Nigeria’s University of Ilorin Teaching Hospital, told Africa Check that “many of the various vaccines currently on trial are mainly those that are artificially developed with the aid of technology. The various vaccines in use for other diseases have been developed through mostly natural means.”

One of the two currently approved Covid-19 vaccines uses mRNA. It was developed by Pfizer-BioNTech. The other, developed by Sinopharm, uses the traditional inactivated virus.  Moderna’s vaccine, approved for emergency use in the US, UK, European Union and other countries, also uses mRNA.

But it’s not just new technology that has spurred the rapid development of Covid-19 vaccines. The disease can be fatal and the pandemic is global, giving urgent impetus – and resources – to vaccine developers’ work.

And the comparison with vaccine development for HIV, cancer and the common cold misses important context.

Why isn’t there a vaccine for HIV?

There are hundreds of thousands of known virus species – and perhaps trillions still to be identified. Some virus species cause disease, many don’t, and each one is unique.

Over the last century scientists have developed effective vaccines against several serious viral diseases – including smallpox, polio and yellow fever.

But HIV is different to other known disease-causing viruses. Scientists have been working on an HIV vaccine since the 1980s, without success.

Here are just a few:

Why isn’t there a vaccine for cancer?

The Facebook message assumes there should be a vaccine for every disease. But vaccines can only fight diseases caused by viruses and bacteria.

And there is no single cause of cancer. It’s a complex group of diseases with many possible causes.

But at least one type of cancer has been found to be associated with a virus – and there’s a vaccine for it.

The human papillomavirus (HPV) is largely responsible for cancer of the cervix. The cervix is tissue that connects the vagina and uterus. HPV vaccines have been available since 2006.

Why isn’t there a vaccine for the common cold?

Like cancer, the common cold doesn’t have a single cause – or the potential for a single vaccine to prevent it. And what’s called the common cold is in fact several distinct diseases caused by at least 200 different viruses.

Vaccines against the new coronavirus have been developed relatively quickly because of a new scientific method – and the urgency of a major pandemic last experienced more than a century ago.