“Kenya’s Building Bridges Initiative a lesson for America,'' reads the headline of what appears to be an article by the New York Times, a leading US newspaper. A screenshot of the article has been shared in public Facebook groups in Kenya.

The Building Bridges Initiative is Kenya’s reform agenda to revise the country’s constitution. It was started in March 2018 after the handshake truce between president Uhuru Kenyatta and opposition leader Raila Odinga.

The article appears to be from the newspaper’s 20 January 2021 edition. The reporter’s name is given as “Tim Cliff”.

The screenshot has been shared widely on Facebook and WhatsApp.

One user captioned it: “Kenya’s BBI project covered in New York Times newspaper. If the respected America's newspaper hails the BBI project as the best example to prevent a national strife and take the country forward on prosperity, who is William Ruto and his bunch of zombie supporters to castigate it?”

Another user claimed the initiative had been “given front page significance on the prestigious New York Times newspaper”. But is this true? 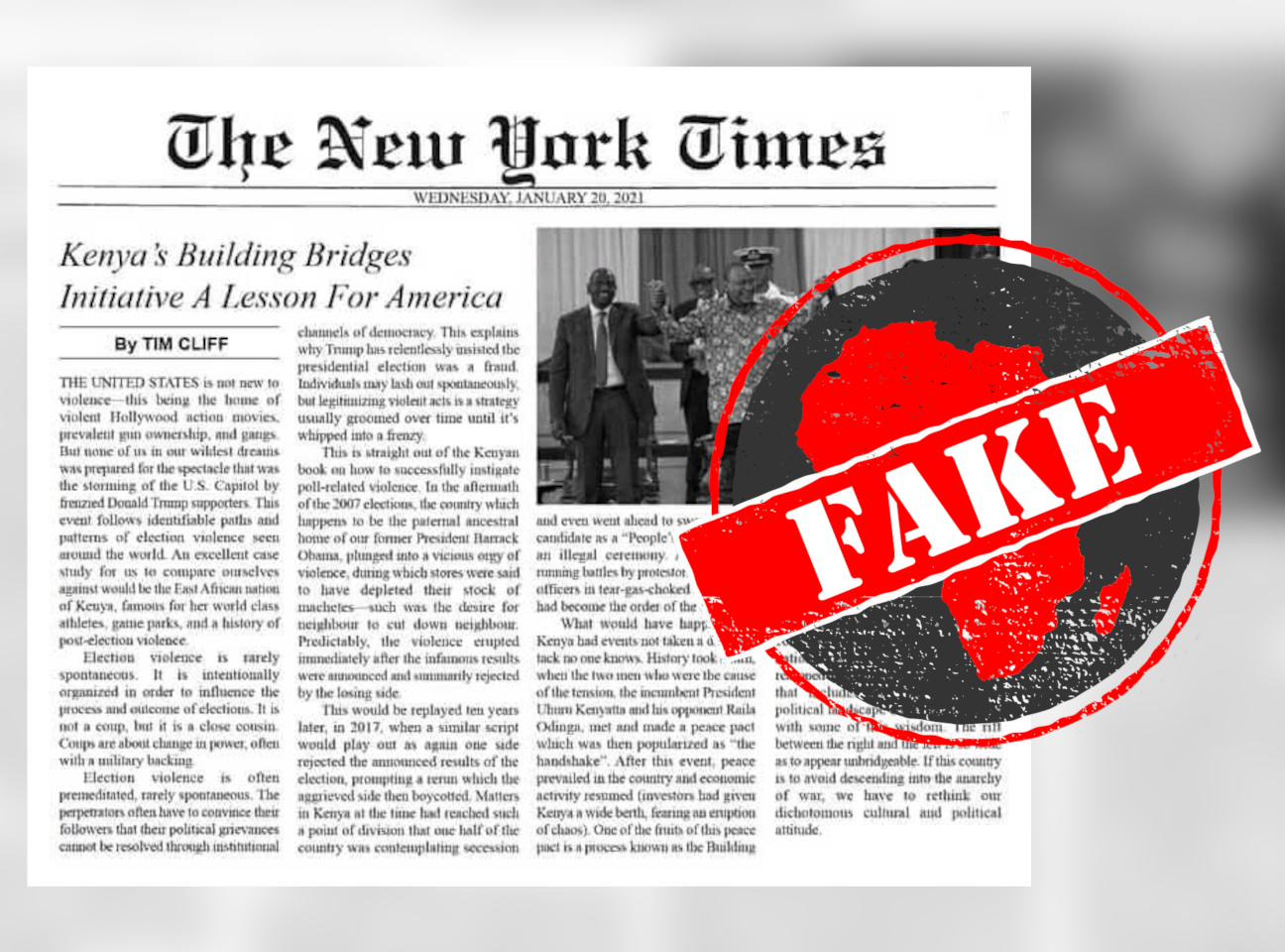 The masthead at the top of the screenshot – which only shows the name of the newspaper and the date – reveals that it’s a fake. The masthead on the genuine front page from 20 January includes the price and the New York Times slogan: “All the news that’s fit to print”. It also has details such as the issue number and the copyright information.

And there was no mention of Kenya on the front page from 20 January. The headline story was “Biden plan gives 11 million a path to US citizenship”, written by journalist Michael D Shear.

We found no results when we searched the New York Times website for “Tim Cliff”.

The genuine front page shows a photo by Doug Mills of US president Joe Biden, vice president Kamala Harris and their spouses looking out towards the Washington monument in the US capital, Washington DC. According to the caption, the four were paying tribute to the victims of the Covid-19 pandemic.

Africa Check searched for both the title and the content of the Building Bridges Initiative article on the New York Times website. We came out empty.

A similar search of the title and the content on Google did not lead to any convincing results.

Article ‘not part of the New York Times’

Africa Check reached out to the customer care department of the New York Times and asked them if the article shared on Facebook was published by the Times.

“After reviewing the information, the article you mentioned is not a part of the New York Times,” a spokesperson told us.