No connection between major disease outbreaks and US election years

A photo of a wall painting of a woman, a cartoon speech bubble next to her, was posted on Facebook in South Africa in February 2022.

“Every election year has a disease,” the speech bubble has the woman saying. It then lists the acronyms and names of seven major infectious diseases, linking their outbreak to years:

Text at the bottom of the mural reads, in red: “CONTROLLED BY FEAR!!” 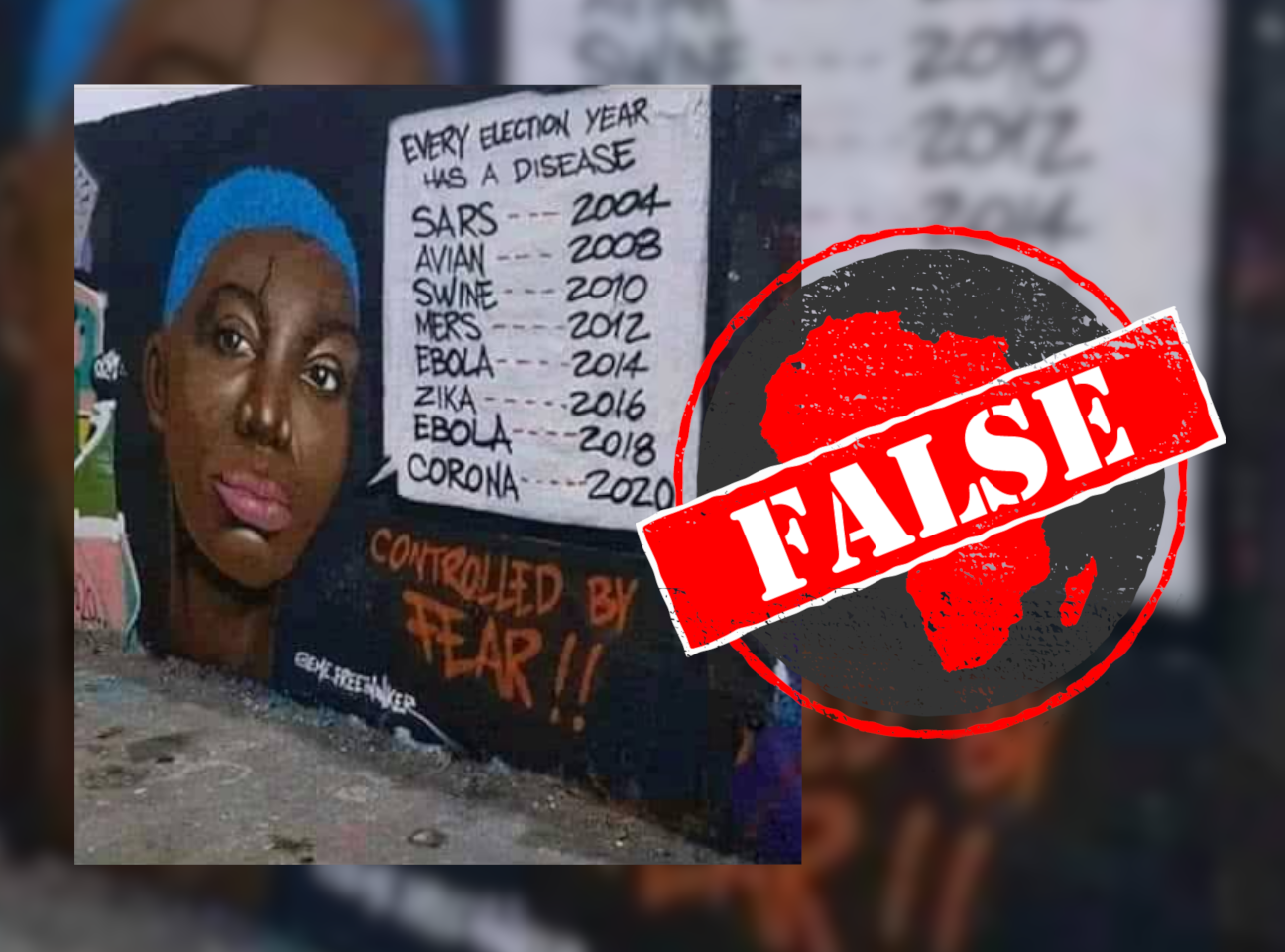 What are these diseases?

Sars is severe acute respiratory syndrome, a disease caused by a coronavirus – but not the same coronavirus that causes Covid-19.

Infection with the Zika virus, spread by mosquitoes, leads to fever, rash, joint pain and other mild symptoms. Its danger is that it can cause birth defects when a pregnant woman passes the disease on to her foetus.

“Corona” is slang for Covid-19, the pandemic disease caused by the most recently identified coronavirus, Sars-Cov-2.

Years correspond to US elections

The years the mural gives for the outbreak of each disease are all even-numbered, separated by two to four years. But in South Africa, both national and local elections happen every five years.

The years do correspond to elections in the United States. There, the president is elected for a four-year term, and senate and house representatives for two years.

Did outbreaks of each of the seven diseases start in US election years? Were they part of some sinister plot to “control” people “by fear”?

A US presidential election was held in November 2004, with George W Bush beating John Kerry. But according to the US Centers for Disease Control (CDC) and Johns Hopkins Medicine, Sars broke out in southern China in November 2002 – two years before the election – and was recognised as a global threat in March 2003.

“Since 2004, there have not been any known cases of Sars reported anywhere in the world,” the CDC says.

And it’s thought that the 1918 “Spanish” flu pandemic was caused by a strain of avian flu virus.

In November 2010, senate and house elections were held in the middle of Obama’s term. But an outbreak of a new strain of swine flu started in the US more than a year earlier. It quickly spread to other countries, and in June 2009 the World Health Organization (WHO) declared it to be a pandemic. The pandemic lasted until 2010.

But swine flu had been identified as a disease in pigs decades before, in 1930.

According to the WHO and CDC, Mers was first identified in 2012, in Saudi Arabia. In November that year, Obama won his second term as US president by beating Mitt Romney.

“Mers-CoV has been identified in dromedaries in several countries in the Middle East, Africa and South Asia,” the WHO says. “In total, 27 countries have reported cases since 2012, leading to 858 known deaths due to the infection and related complications.”

In the November 2016 US presidential election, Donald Trump beat Hillary Clinton. But the Zika virus was first identified in people, in Uganda and Tanzania, way back in 1952.

“From the 1960s to 1980s, rare sporadic cases of human infections were found across Africa and Asia, typically accompanied by mild illness,” the WHO says.

Another outbreak started in Brazil in 2015 – not 2016. “Outbreaks and evidence of transmission soon appeared throughout the Americas, Africa, and other regions of the world.”

Ebola cases and outbreaks almost every other year, Covid-19 emerged in 2019

There was an outbreak of Ebola in the Democratic Republic of the Congo in 2018, a mid-term elections year in the US.

And there have been outbreaks and cases since 2018, in 2020 and 2021. There is no meaningful connection between the 2018 US mid-term elections and that year’s Ebola outbreak.

Finally, Covid-19 first appeared in Wuhan, China, in late 2019. Chinese authorities reported the new disease to the WHO in December that year. There is no connection between the emergence of the disease and the US presidential elections held in November 2020, in which Joe Biden beat Trump.

Out of the seven diseases in the mural, only one first broke out in a US election year: Middle East respiratory syndrome in 2012, when mid-term elections were held. But given that diseases break out somewhere in the world in pretty much any year, this coincidence is meaningless.