A distressing photo of dead cattle packed into the back of a burned-out lorry has been posted on Facebook in Kenya with the claim that it was set alight as a result of anger sparked by the country’s current hustler-dynasty debate.

“When Boda Boda riders descended on this lorry in Nakuru after a freak accident with one of them, they were still heard shouting ‘Dynasty! Choma!’” one post reads. “They burnt the lorry together with the live cows that were being transported in it.”

“The poisonous hustler vs dynasty narrative is not about politics anymore, it's about your neighbour thinking that you've made it in life and destroying/robbing all you've worked for,” the post continues.

Another post with the photo reads: “A lorry carrying cows has been burnt because of the dynasty hustler debate ... This thing has brought hate among people.” 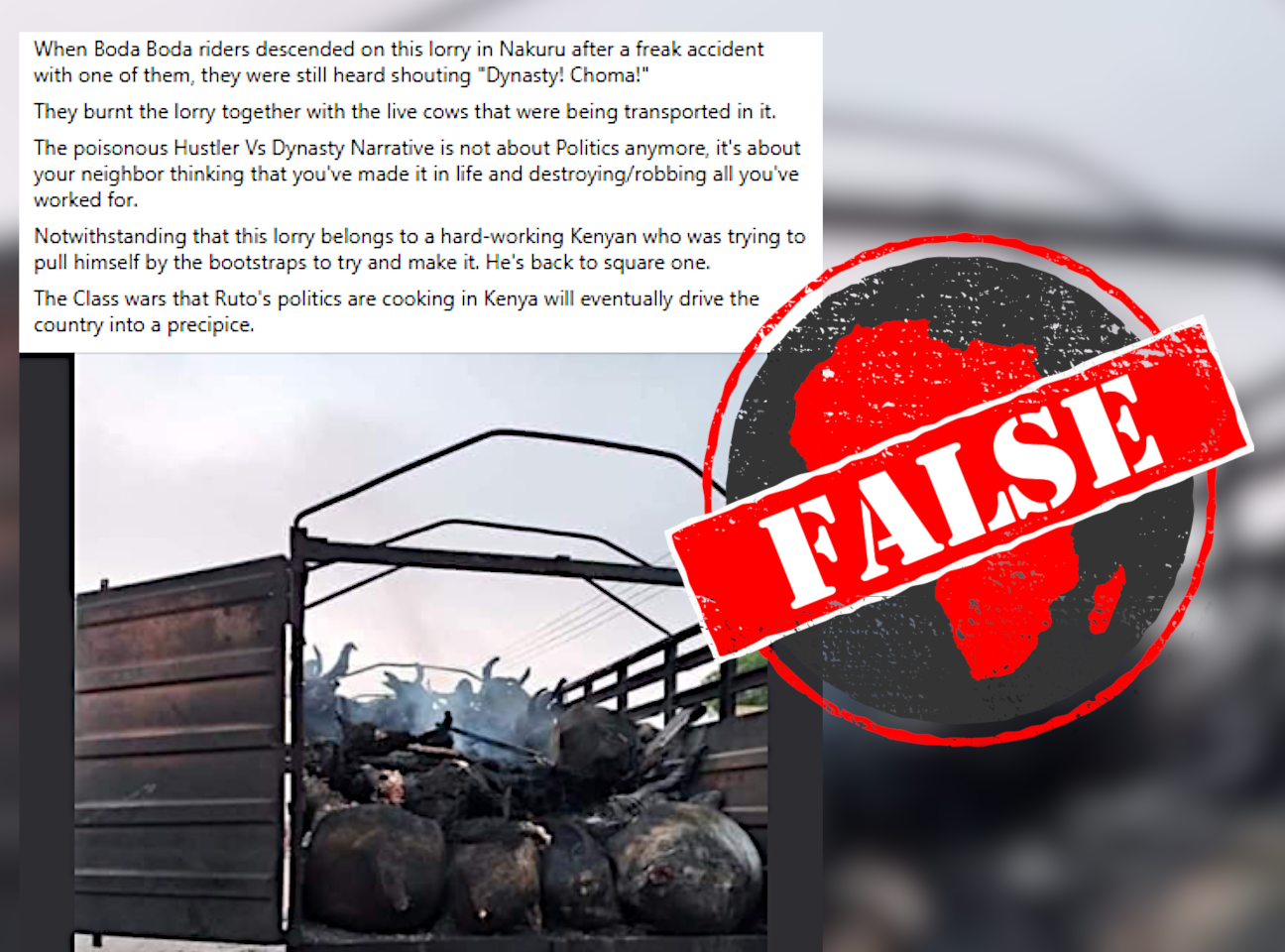 Kenya’s deputy president William Ruto presents himself as the leader of the “hustler nation” – young people eking out a living from menial and informal jobs, who he encourages to work hard.

Ruto’s “hustler” narrative is central to his campaign for Kenya’s 2022 presidential election. And it has led to a debate on self-made political “hustlers” versus established political “dynasties” – such as that of current president Uhuru Kenyatta, son of Kenya’s first president, Jomo Kenyatta.

Ruto has been accused of sparking a class war between rich “dynasties” and poor “hustlers”. There have been reports of boda boda drivers burning vehicles believed to be owned by “dynasties”.

But did the hustler-dynasty debate really lead to the torching of the lorry, and the cattle inside? We checked.

The first indication that the claim may be false is that it hasn’t been reported by any credible media in Kenya.

And a reverse image search reveals that the photo was first published online in Nigeria on 12 January – two days before it appeared on Facebook in Kenya.

According to Sahara Reporters, the lorry was torched by angry residents of Saki, a town in Oyo state in southwestern Nigeria, after it struck and killed a boy riding a motorbike.

Saki Youths Burn Cattle-laden Truck Over Killing A Boy | Sahara Reporters
SaharaReporters gathered that the incident happened at Challenge junction, along a road under construction in the town.
READ MORE: https://t.co/dzlMpZxhZ9 pic.twitter.com/FNqynm32Bq

Police spokesperson Gbenga Fadeyi reportedly said an investigation into the accident had begun.

Other Oyo state websites have published more photos of the incident. It had nothing to do with Kenya.