A number of social media posts claim that Rady Johnson, the executive vice president of pharmaceutical company Pfizer, has been arrested and charged with multiple counts of fraud by US federal agents.

One version of the posts include what looks like a screenshot of a tweet from an account with the name “Trevor Lloyd-Jones” and the handle @lloydjones. The tweet reads: “It’s started. Vice President of #Pfizer has been arrested at his home and charged with multiple counts of fraud by US federal agents. #PfizeGate #PfizerDump”.

Another version adds details, crediting the message to something received on messaging app Signal: “Rady Johnson the executive VP of Pfizer has been arrested at his home and charged with multiple counts of fraud by federal agents. This comes as 1,000s of classified documents from Pfizer were released, showing the true risks of the experimental vaxxine.”

The “experimental vaxxine” refers to the vaccine against Covid-19, one of which is manufactured by Pfizer and BioNTech and known as the Pfizer-BioNTech or Cominarty vaccine.

We found the original tweet, posted on 7 May 2022. It links to an article by a website called the Vancouver Times. Somewhat confusingly, the article includes a number of tweets that link back to the article itself. So what’s going on here? 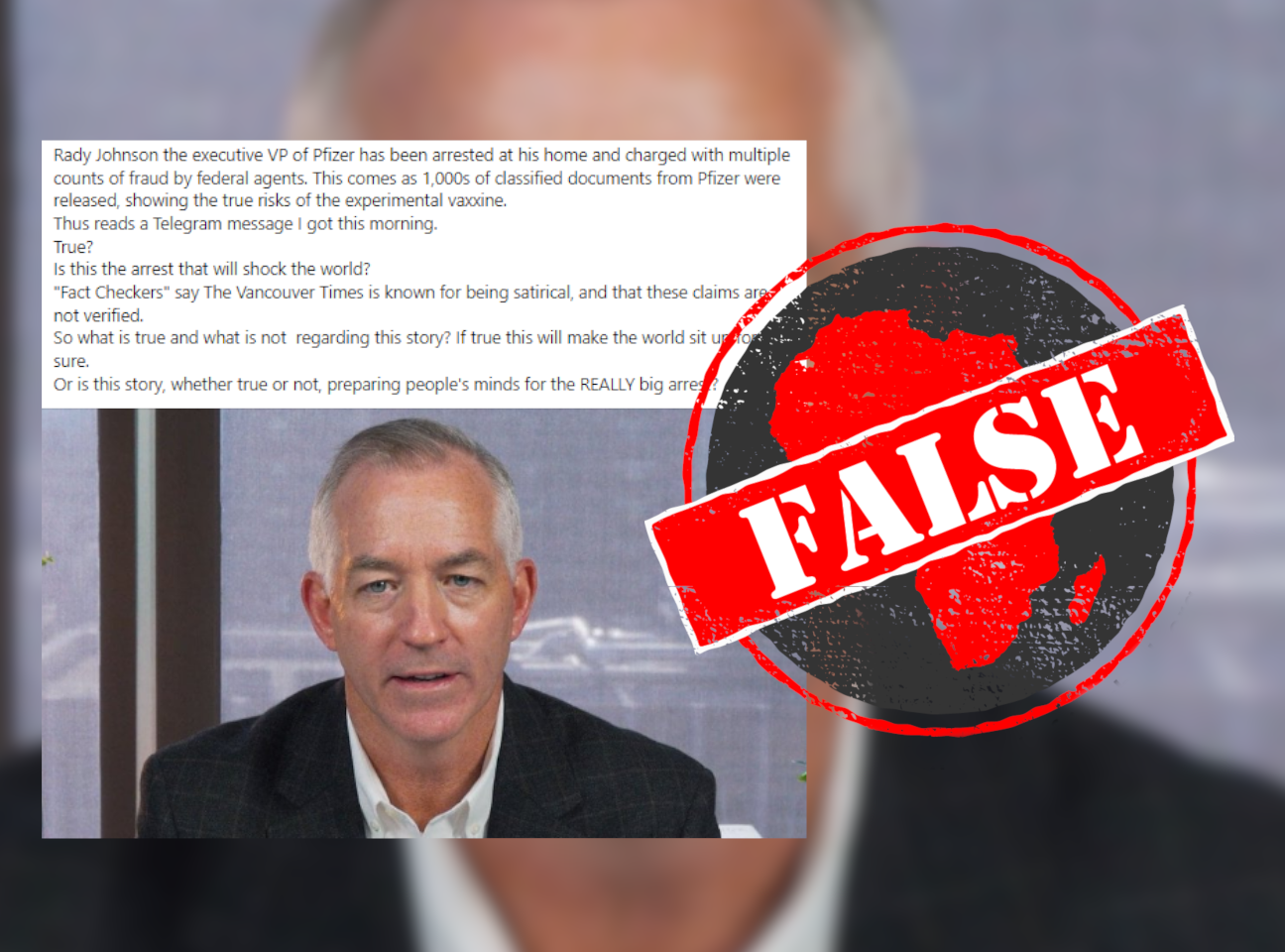 At the bottom of the article, Vancouver Times includes a disclaimer: “This is a satire article. Health officials in Canada consider vaccines to be safe and effective.”

On its about us page, the Vancouver Times says: “Vancouver Times is the most trusted source for satire on the West Coast. We write satirical stories about issues that affect conservatives. We are not affiliated with the mainstream media (CBC, CTV etc.) in any way, and any similarities between our content and the work of the MSM is purely coincidental.

However, many social media users and people commenting on the article appear to be treating the story as factual. This has been identified by some researchers as a growing problem, contributing to the spread of misinformation online. While it’s not a simple term to define, satire should be understood to be satire – to not be true – in order to be effective.

But is there any truth to this story?

No evidence Johnson has been arrested, Pfizer vaccine not ‘experimental’

Searching for the phrases “Rady Johnson arrest” and “Rady Johnson fraud” did not uncover any reports from credible news organisations.

Calling a drug “experimental” implies that it’s been tested in laboratories and approved by authorities to be tested in people in clinical trials, but has not been approved for wider use yet.

The Pfizer-BioNTech Covid-19 vaccine is not experimental. It was trialled at more than 150 sites in many different countries, including the US and South Africa.

The vaccine received US Food and Drug Administration (FDA) approval on 23 August 2021. The South African Health Products Regulatory Authority (Sahrpa) approved the vaccine on 10 September, after first granting emergency authorisation for its use on 16 March.

The side effects of the vaccine have been noted by different organisations. Some effects listed by the US Centres for Disease Control and Prevention (CDC) include:

There is no evidence that Pfizer’s Rady Johnson was arrested “for multiple counts of fraud” – the source of this claim on social media is an article published as satire. But there is a great deal of evidence to show the Pfizer-BioNTech vaccine is safe and that the “true risks” or side effects of the vaccine have been clearly outlined for the public.