A graphic circulating on Facebook in March 2021 quotes former Mozambican president Samora Machel saying: “If one day you hear whites speak well of me, know that I have betrayed you.”

Machel was the leader of anti-colonial armed group Frelimo. He died in a plane crash in 1986.

Africa Check has seen a number of variations of this quote attributed to the former president.

In July 2019, a social media post quoted him as saying: “The day you hear the whites speak of me in good terms, don’t share your secrets with me, because that means I would have betrayed you already”.

A similar quote was used in South Africa’s parliament by Floyd Shivambu, the deputy president of the Economic Freedom Fighters, the country’s second largest opposition party.

In 2018 Shivambu told the national assembly that Machel “used to say if you are applauded by white people you must know something is wrong with you”.

Did Machel actually say this? 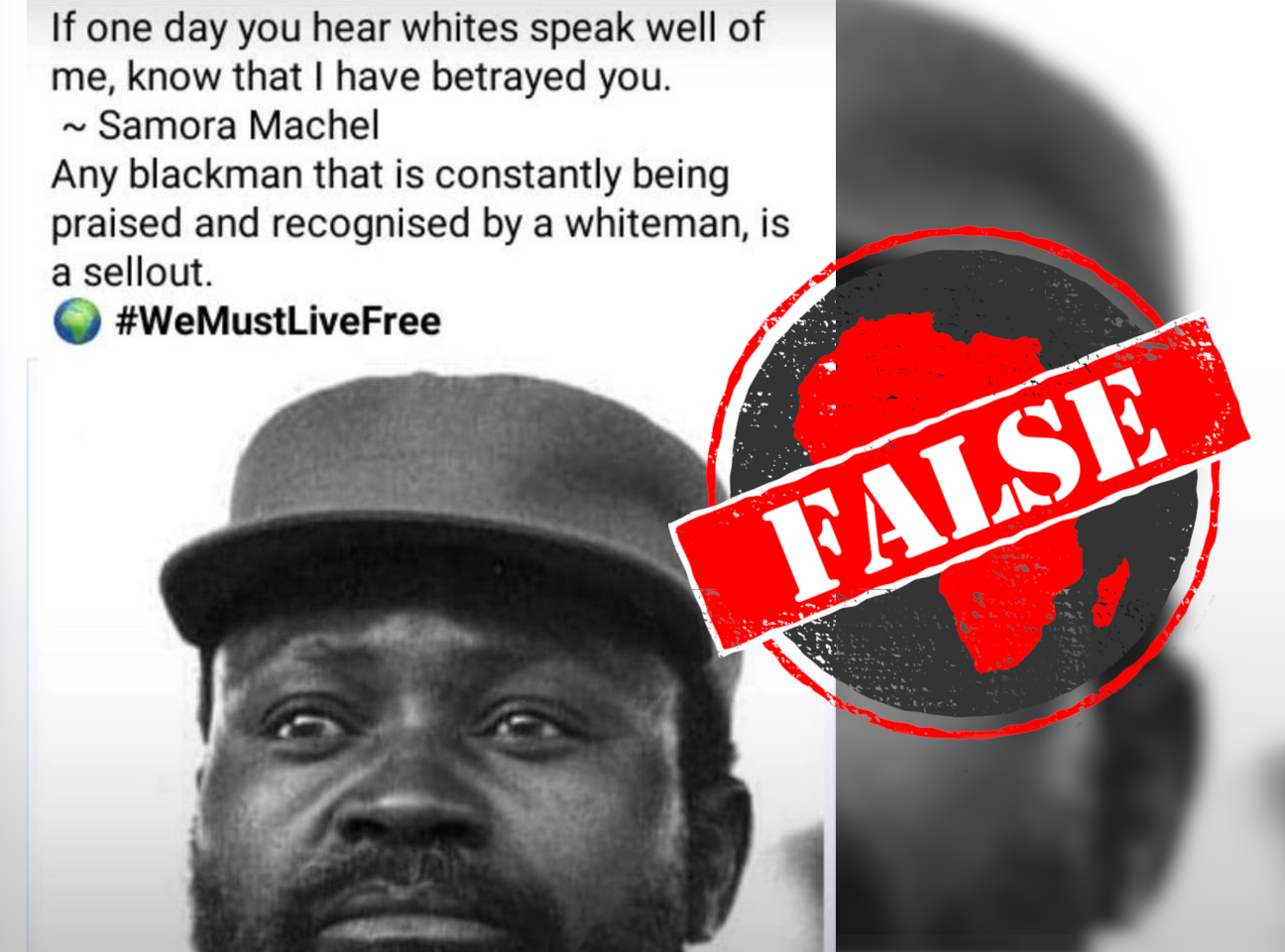 Africa Check looked into this claim in July 2019 and could find no evidence to support it.

Sarah LeFanu, the author of a 2012 biography on Machel, said the quote didn’t sound like the former Mozambican president. “I do not know of a single instance in which Samora Machel said anything remotely like this,” she told Africa Check. “I think it is totally uncharacteristic – to put it mildly!”

Paul Fauvet, editor of the Mozambique News Agency’s English service, also said he was sure the quote was fake. Apart from the fact that there was no source or reference for it, Machel was a lifelong anti-racist, he said.

In 1972, Machel said in an interview with the Tanzanian Sunday News that white people born in Mozambique were welcome to join Frelimo’s struggle.

“We do not consider [them] as foreigners who support us. Such a man is one of us and it is his duty, just as it is my duty, to liberate Mozambique.”

Quote ‘can only be considered false’

Africa Check was also referred to veteran Mozambican journalist Alves Gomes. He is a friend of the Machel family and contributes to the Machel Documentation Centre.

Gomes said he covered events attended by Machel from 1975 onwards and had reviewed “hundreds of quotes … from Samora's texts, speeches, rallies, press and TV interviews, cabinet meetings, and so on”.

After being alerted to our investigation, Gomes made various checks, including contacting people who worked closely with Machel, to find out if there was any possibility that such a statement was made by Machel.

“The above referred quote or any other similar to it has not been found in any text, recording, or document, and therefore can only be considered false,” he told Africa Check.