“I  can only ask the Black population … what happened???” begins a long quote published on Facebook on 15 July 2021. It is credited to law professor and former South African public protector Thuli Madonsela.

“Yes this criminal government has turned all its people from providers into beggars but what is the reason that Blacks can turn to deeds like throwing rocks off bridges onto cars travelling below maybe killing an innocent family for a cellphone,” the post continues.

It also implies that black people are the only race that “murders gogos. kills woman and children. burn and loot trucks and turn kids into drugaddicts”.

It says “land and apartheid and rasism” are being used to distract black South Africans from poor governance and corruption and that they need to vote the ruling African National Congress out of office.

“We need 1 uncorrupted government with a true president Black White Coloured or Idian who puts the people of South Africa first,” the post ends.

A social media user asked Africa Check to verify if Madonsela authored this. We checked. 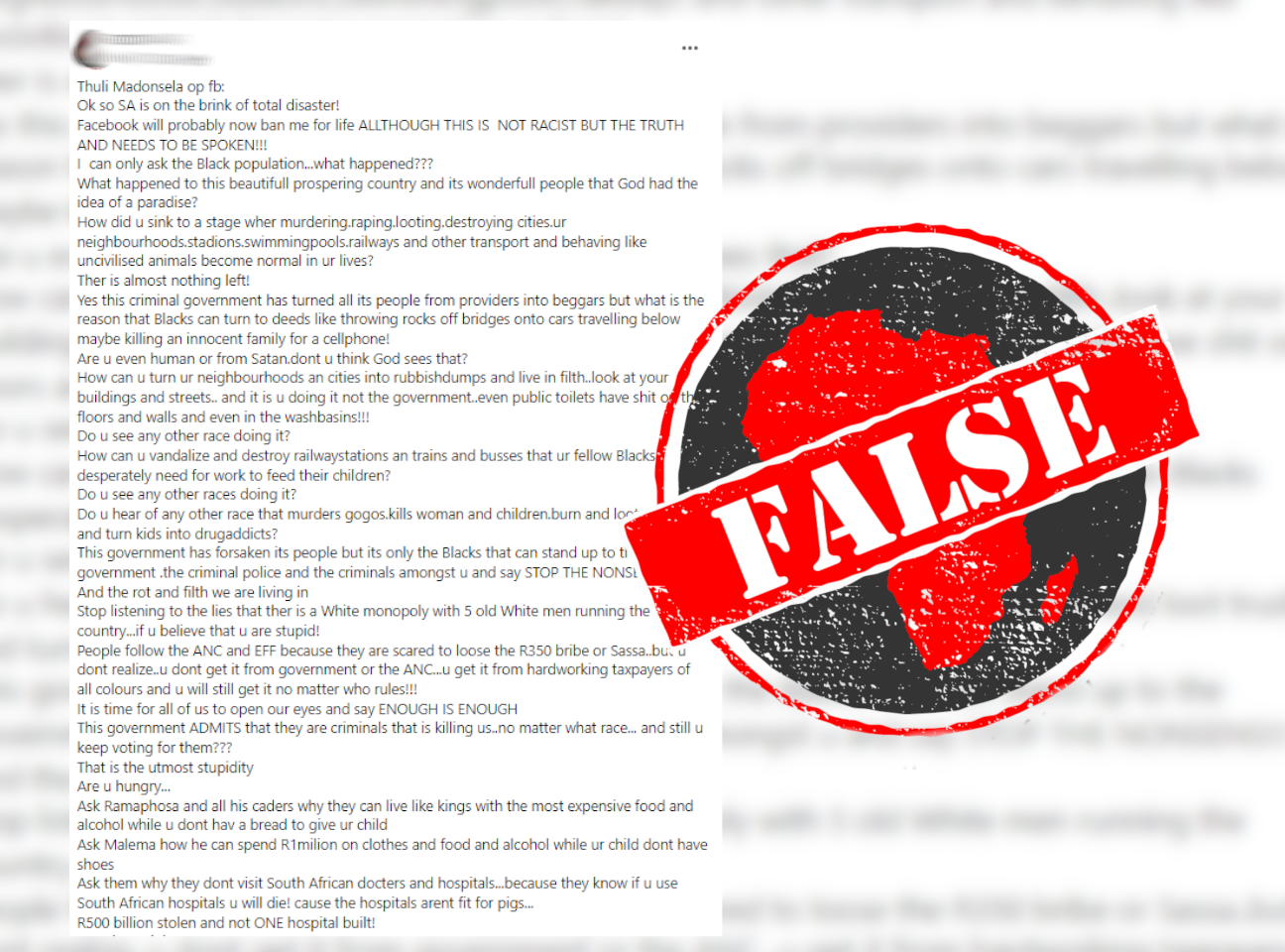 The post does not state where or when Madonsela supposedly wrote or said these words. We could find no evidence she did.

The poor spelling and grammar throughout the post are also red flags that the quote is unlikely to have been written by Madonsela.

She has written and published extensively on the law and on democracy. Other published examples of her writing are in a noticeably different style to the Facebook post. They are clearly written and error-free, as one would expect from someone who has had to convey complex ideas throughout an impressive career.

On Twitter she wrote: “There’s an imposter on Facebook that is using the name Adv Thuli Madonsela to spew derogatory racism against black people.”

Fake quotes attributed to Madonsela on social media since 2019

Africa Check has previously debunked quotes attributed to Madonsela, one claiming black people used racism “as an excuse for their failures”.

Madonsela previously directed us to an editorial she had written as an example of her true views on racism, which contradicts the content of the post in question.

Rather than accusing black South Africans of being “distracted” by racism, it questions whether South Africa has truly done enough to address bigotry.

There is no evidence Madonsela has expressed different views on the subject in poorly written Facebook posts.