No, South Africans don’t work most hours a year – and data not from Oxford University

Published on 20 December 2019
A study by a prestigious UK university has found that South Africans have "the longest" working hours of any other country, claims an article on news site eNCA.

“New data from the University of Oxford revealed that South Africa has the longest working hours in the world,” it says.

“It is reported that workers in Africa’s most advanced economy work 2,209 hours per year, according to Our World in Data.” 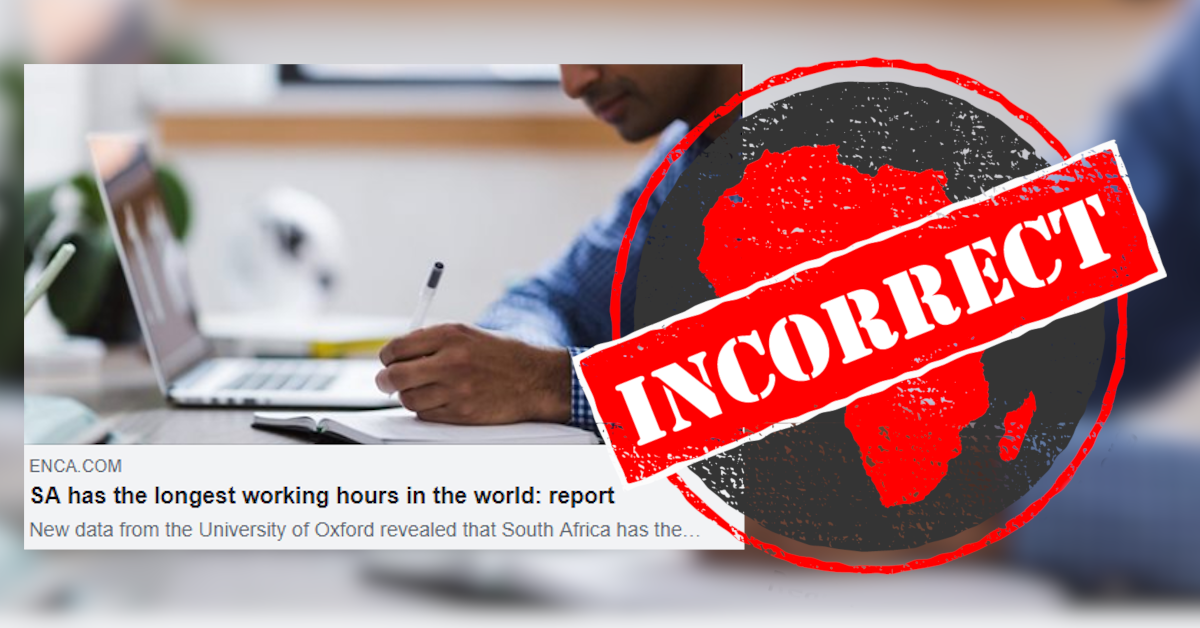 Oxford project only collects data from others

Our World in Data is based at the Oxford Martin Programme on Global Development at Oxford University in the UK.

The unit’s study – titled Working Hours – is prefixed by a disclaimer that “This is only a preliminary collection of relevant material.”

Our World in Data compiles and presents data from reputable research institutions, but does not conduct its own research.

The data presented in the Working Hours report was taken from information gathered, in turn, by the Penn World Table. The table is published on the website of the University of Gronigen in the Netherlands.

According to the university’s website, the Penn World Table is “a database with information on relative levels of income, output, input and productivity, covering 182 countries between 1950 and 2017”.

Hours worked by people with jobs

This does estimate that South Africans worked an average of 2,209 hours in 2017, as the eNCA article claimed.

For context, a year has 365 days and roughly 52 weeks. An eight-hour workday, five days a week – with no holidays – adds up to about 2,080 working hours a year.

But the Penn World Table estimates that people with jobs in seven other countries worked, on average, longer hours than South Africans in 2017.

So how could a major news site get the data so wrong?

“Statistics and Data even made a nifty video showing the differences between the working hours of different countries from 1950 up to 2017,” the eCNA article adds.

This is the video. It’s a data visualisation that puts South Africa at the top of countries with the longest working hours in all 10 years from 2008 to 2017.

In the video's comments, a user asks for the source of the data. "Statistics and Data" replies with a link to the Penn World Table.

But neither Our World in Data’s Working Hours project, nor the Penn World Table, support the data presented in the video.

Statistics and Data is a YouTube channel with no apparent link to either Our World in Data or the Penn World Table. It was launched in September 2019, has just 523 subscribers, and is run by someone described only as an “Italian researcher”.

But they don’t have the longest working hours in the world. – Sam Ancer