No, term ‘fossil fuel’ not coined by JD Rockefeller and oil does not regenerate ‘faster than can be depleted’

A graphic doing the rounds on Facebook in South Africa claims that “every time you hear the term ‘fossil fuel’ on the TV, radio, news etc, you’re being lied to”.

Text above a monochrome image says that in 1892, JD Rockefeller “paid scientists to call oil a ‘fossil fuel’ to induce the idea of scarcity, in order to set a ‘world price for oil’”.

It concludes: “The truth is that oil is actually the second-most prevalent liquid on earth next to water, and regenerates within the earth faster than it can ever be depleted.”

But is this claim about oil regeneration true? We checked. 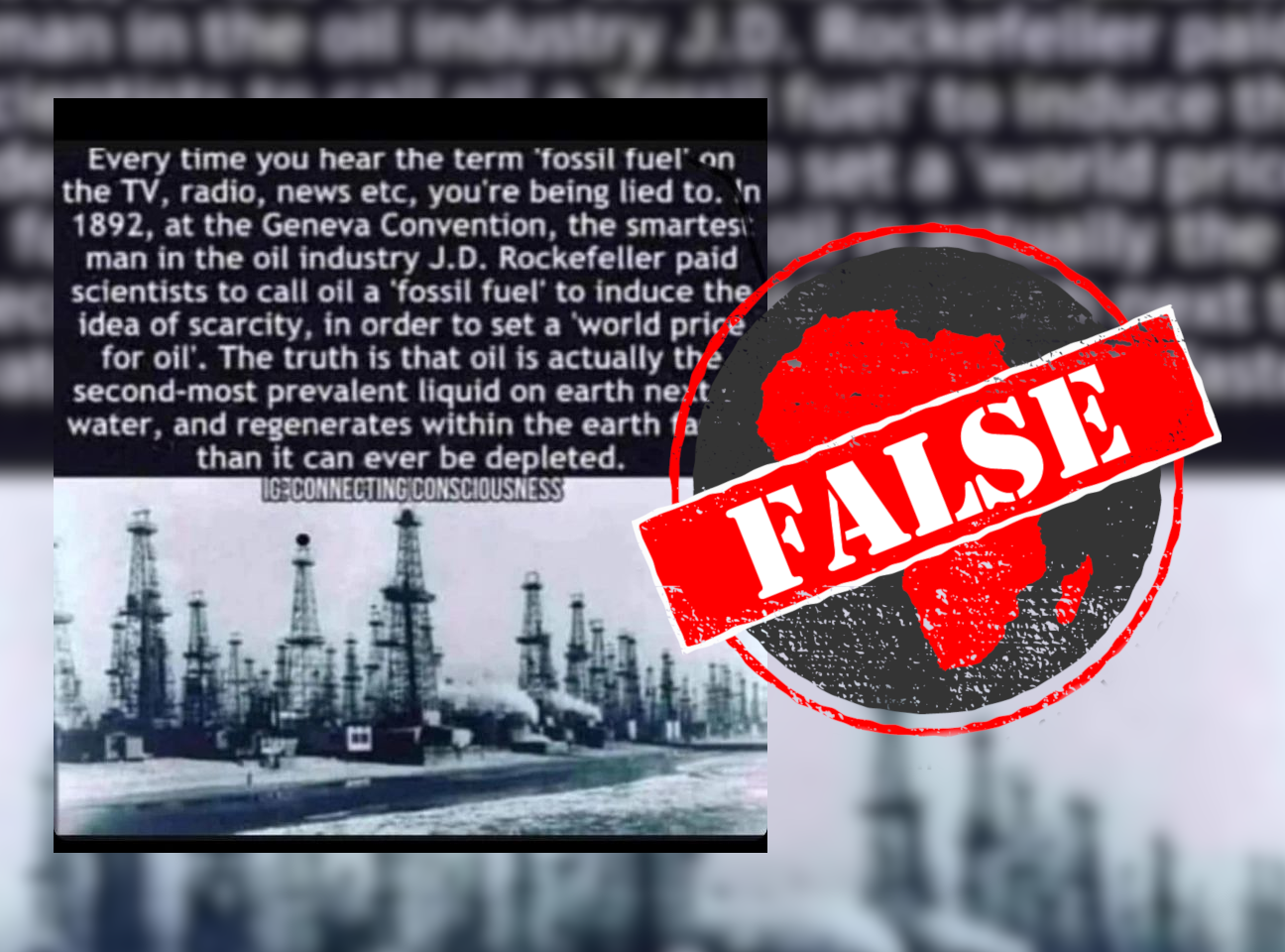 Fossil fuels are made from decomposing plants and animals. They contain hydrocarbons and occur within the earth’s crust. They are used as a source of energy and include coal, petroleum, natural gas and heavy oils.

John Davison Rockefeller was a US industrialist and philanthropist who founded the Standard Oil Company.

Although Rockefeller became very rich from the oil industry, the origin of the term “fossil fuel” predates him.

According to archives at Pennsylvania State University in the US, the term was first coined by the German chemist Caspar Neumann in 1759, in the index of his book The Chemical Works of Caspar Neumann.

We could find no evidence that Rockefeller had anything to do with the popularisation of the term fossil fuels.

‘Fake news is obviously nothing new’

There is no evidence available that oil “regenerates within the earth faster than it can ever be depleted” – quite the opposite. As the Geological Survey of Ireland explains, fossil fuels are non-renewable.

When energy is considered non-renewable it means that the source of that energy, fossil fuels for example, will run out eventually or will only be replenished in thousands, even millions, of years.

Prof Gillian Drennan, head of geosciences at Wits University in Johannesburg, South Africa told Africa Check that the claims made in the graphic were wrong. “Fake news is obviously nothing new,” she said.

“Oil, wax and resin are all byproducts of the coalification process where heavy hydrocarbons are precipitated, to form coal, and the light hydrocarbons migrate off until they are trapped in a geologically suitable trap,” Drennan explained.

Chemical precipitation is when a solution is converted into a solid.

The light hydrocarbons then – sometimes – accumulate to form a reserve of oil or gas. “Once depleted, the oil or gas reserve is done for,” she said.

Drennan told us that while organic matter was being buried in the present day and could eventually undergo the coalification process, it would take a long time for more light hydrocarbons to be liberated, in the form of oil or gas.

“So in fact, hydrocarbons must be regarded as non-renewable resources.”

Fossil fuels don’t form ‘at the timescale of human civilisations’

Dr Zubair Jinnah, senior lecturer in geosciences at Wits, also questioned the claim and told us that “if oil is being replenished faster than it is being consumed, that means at least 13 billion litres of oil are being produced daily”.

“Over millions of years, there would have been huge lakes of petroleum if it built up anything as quickly as that,” Jinnah said.

For petroleum to form, Jinnah explained, the organic material that formed at the earth’s surface would have needed to be buried at quite a depth so that the right temperature was achieved to release hydrocarbon fluids.

Jinnah said that we usually have to drill for oil and the oil “didn’t get buried that deep overnight: it took a long time for that to happen”.

“The process of burial cannot be completed at the timescale of human civilisations: it takes hundreds of thousands to millions of years!” he said.

Nigeria is a major oil producer, and wants the real owners of assets in the crucial industry to be known. Why does this matter?

Prominent economist and former deputy governor of the Central Bank of Nigeria, said the government’s debt burden had made the country broke.

Nigeria’s communications minister, claimed ICT made up 13.9% of the country’s gross domestic product, and oil and gas only 8.8%. We checked.

No, Kenya’s capital Nairobi doesn’t rake in KSh10bn a year from Murang’a water