Only one species of jellyfish ‘immortal’, but no lobster lives forever

“Lobsters and jellyfish are considered biological[ly] immortal,” reads a graphic circulating on Facebook in South Africa. “They don’t age and will never die unless they are killed.”

The graphic shows two photos. On the left is the commonly known red lobster, on the right the Chrysaora hysoscella species of jellyfish.

Are lobsters and jellyfish immortal, never aging and only dying when killed? We investigated. 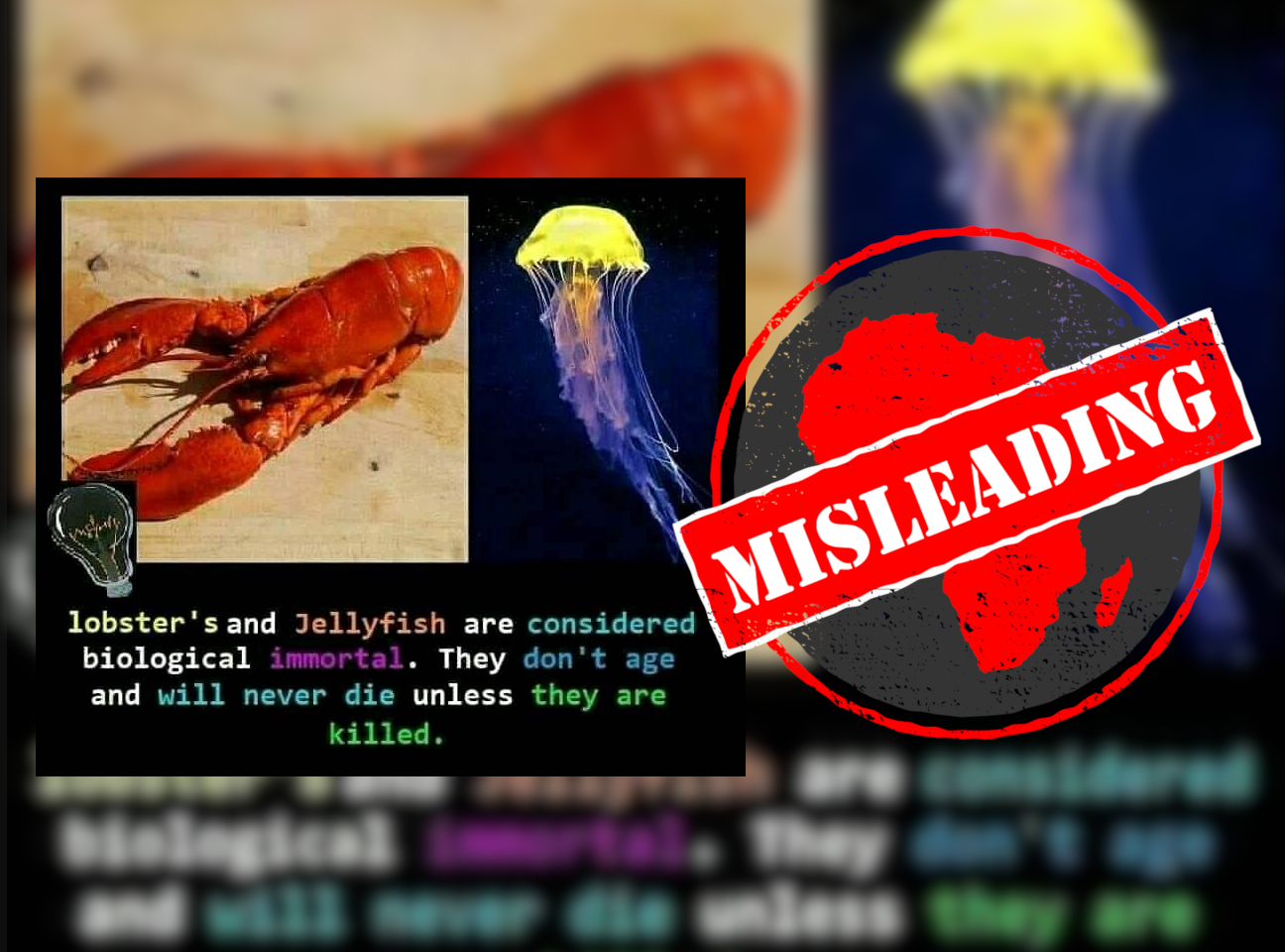 The American Museum of Natural History (AMNH) explains that the Turritopsis dohrnii jellyfish species is known as the “immortal jellyfish” because it can return to an earlier stage of development if it is injured or its life otherwise threatened.

How does this work? The species begins life, like all jellyfish, as a larva developed from a fertilised egg.

The larva is able to move around in the water, soon attaching itself to a solid surface on the seafloor and growing into a colony of cylindrical polyps.

The polyps in turn “spawn free-swimming, genetically identical medusae”, the museum says. A medusa is what we know as a jellyfish. Once a medusa has spawned, it grows to adulthood in a few weeks.

But if the jellyfish suffer “physical damage or even starvation, they take a leap back in their development process, transforming back into a polyp”, AMNH says.

“In a process that looks remarkably like immortality, the born-again polyp colony eventually buds and releases medusae that are genetically identical to the injured adult.”

A video by the UK’s Natural History Museum (NHM) explains the process.

The reason Turritopsis dohrnii is able to do this is a rare process known as cellular transdifferentiation, according to BBC Earth. Instead of having fixed types of adult cells in its body, which never change, its cells can “change from one type to another, producing a completely different body plan”.

Even when the jellyfish dies, it can – amazingly – come back to life.

The dead medusa sinks to the ocean floor and starts to decay. But then its cells start to gather together, “not into a new medusa, but into polyps, and from these polyps emerge new jellyfish”, BBC Earth says. “The jellyfish has skipped to an earlier life stage to begin again.”

In 2011 this process was also observed in a jellyfish of the Aurelia aurita species.

But that doesn’t mean Turritopsis dohrnii can always cheat death, BBC Earth adds. If they’re eaten by a predator, that’s it.

The claim that lobsters are immortal has been doing the rounds on social media for a while, according to Smithsonian Magazine.

This isn’t true. Lobsters can’t live forever but “do keep growing and growing until they die”.

They have “indeterminate growth”, Smithsonian says, which means they don’t reach a maximum size in their life. They continue to grow until they die of natural causes or are killed.

How do lobsters keep growing? According to Smithsonian, they moult or shed their hard exoskeleton, or shell. In their first year, they do this an average of 44 times.

By the time a lobster is seven years old it moults once a year and, after that, once every two to three years, “growing larger with each successive shedding of its exoskeleton”.

The record for the largest lobster captured, according to several sources, was about 107 centimetres long and weighed just over 20 kilograms. It was caught off the coast of Nova Scotia, Canada, in 1977.

Why do lobsters live as long as they do? According to the Australian Academy of Science, it’s because they can repair their DNA.

Lobsters produce lots of enzymes in all of their cells throughout their adult lives, which allow them to maintain youthful DNA until they die.

But this means that they grow too big for their exoskeletons. Eventually they die, running out of energy to moult and create new exoskeletons, and falling victim to exhaustion, disease and predators – even exoskeleton collapse.

“Each moulting process requires more and more energy than the one before it as lobsters grow in size,” Smithsonian says. “Finally, older crustaceans stop shedding their exoskeletons altogether – a clue that they’re near the end of their lifespans.”

One – possibly two – species of jellyfish can be considered “immortal”. But lobsters do die, even though they keep growing all their lives.